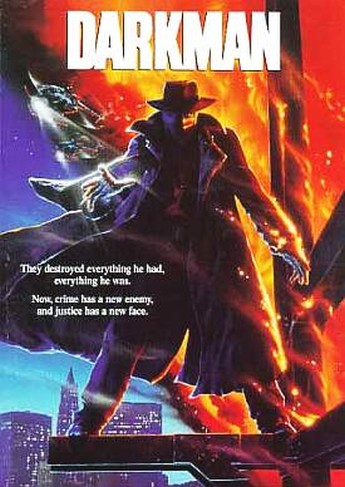 [7] It looks like our Sam has finally proved he can make a successful film without the words ‘Evil’ and ‘Dead’ in the title; has he sold out to join the Hollywood gravy-train? In a word, “No”. While this has elements which could be compared to Robocop, Phantom of the Opera and, of course, Batman, it produces something totally distinct, individual and really quite wonderful.

The hero, played by Neeson, is Peyton Westlake, a chemist developing artificial skin whose fiancee (McDormand) comes across a memo which implicates her boss, property developer Louis Strack (Colin Friels) in corruption and graft. Strack sends in the heavies, who blow up Westlake’s lab, leaving him hideously burned and barely alive. He escapes from the hospital where he’s been treated (beats me why he’d want to do this when he has Jenny Agutter for a nurse!) and recreates his laboratory. He uses the artificial skin to make masks, which are then used to impersonate members of Strack’s mob to try and bring the evil empire down, or allow him to rejoin his fiancee – temporarily, as unfortunately the skin only lasts 99 minutes before melting into sludge. It all builds to a climax on top of a skyscraper, licking Batman into a cocked hat, before the usual sequel-open ending.

And it beats that obvious comparison in almost every other area too – the plot is far more coherent, justification being given for almost every detail, the acting is solid if unexceptional and the effects (with the exception of some shaky back- projection) look a lot better than they should given the budget. But, as in all his other films, the direction overshadows almost everything else – only Raimi could get away with a point-of-view shot for a rivet! There is one sequence involving a helicopter which is just jaw-dropping and other scenes leave you with the breath ripped out of your lungs. It’s not really violent or gory; the most squirm-inducing scenes all involve fingers (I’ll leave any interpretation to the psychologists out there). It is tense, exciting and tremendously entertaining – if the rest of Hollywood could show as much imagination per dollar, the whole world would be trading in their TV sets.