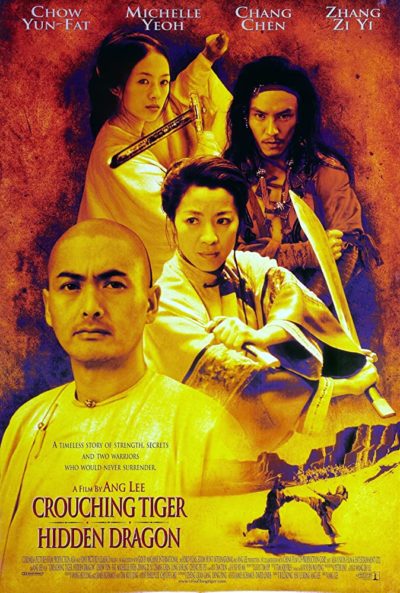 It may be in the US box-office top ten, it may be on every critic’s best of the year list – but it’s not playing anywhere in Arizona. Desperate times call for…Ebay! One questionable Malayan VCD later (allowance duly made for lack of widescreen/poor subs), and I’m set to answer the question as whether Ang Lee could move from chick-flicks like Sense and Sensibility to serious action. I’d give an enthusiastic, albeit qualified, “Yes”. The fights are superb – having Yuen Wo Ping directing them clearly helped there – but fans of Hong Kong cinema won’t find much that’s ground-breaking. The key might be getting Chow, Hong Kong’s best actor, in his first martial arts film, because you can’t question Lee’s handling of emotions. One scene, among the most heart-rending I’ve seen, is enough to show why it’s this one that’s cracking the US market.

My main qualms are with the storyline, combining martial-arts cliches such as a stolen sword with poor pacing which at times makes it seem like you are flicking TV channels. There also should have been a really big fight between Chow and his nemesis Jade Fox (Cheng Pei Pei) – the lack thereof leaves the film suffering from premature ejaculation, its climax coming fifteen minutes too soon. Yet there’s still easily enough here to ensure I’ll be heading for the cinema the day it reaches Phoenix. Whenever that is…