Regular readers will be aware of my firmly-held belief that The Blair Witch Project is among the most over-rated horror movies of all time. They will also understand just how hard my eyes rolled when this opened with the following caption: “In 2016, a film crew went missing while filming an episode of the Internet series Dark Appalachia. Three years later their footage was found.” The path this treads, going deep into the woods with hand-held cameras, is so well-worn it has become a groove. It’s the laziest way possible for film-makers to avoid writing dialogue, having decent audio or coming up with a story-line requiring more effort than filling the back of a beer-mat. Even when that isn’t the case – and the movie is less guilty of those sins than some – it’s a set-up which demonstrates a lack of imagination, and puts the movie behind the 8-ball from the opening. 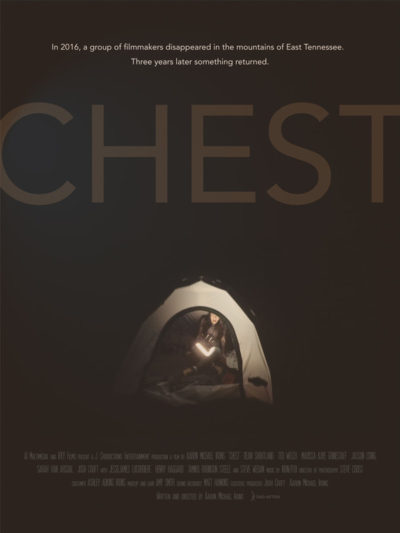 The film-crew here are four in number: camerawoman Stephanie (Kaye), audio engineer Yancy (Welch), producer Isabella (Van Arsdal) and presenter David (Shortland). They head off to investigate a legendary chest, supposedly buried somewhere in the Appalachian forests, and which brings death, torment and evil stuff to those who cross its path. This involves a good fifty minutes of them chatting, either to each other, or to local residents about the area’s folklore. This isn’t badly done, by the standards of the genre, and does provide one moment I genuinely didn’t see coming. It is, however, far too much of what’s still not a very good thing. For that’s not what the found footage genre is about. Why have a crisply-edited 10 minutes, when you can stretch it out to 45 minutes of pseudo-authentic chit-chat? Eventually, the film-crew have to move their lazy asses into the woods, and things proceed in the manner decreed by the Holy Book of Blair. They then reach a waterfall concealing a cave system, and half the group decides to enter, in search of the legendary casket. Anybody seen As Above, So Below?

Snark aside, this isn’t as disastrous as some. The camerawork is half-decent, and the makers have put effort into getting audio in line with that obtained by a professional film-crew. I, for one, appreciate this. When things finally kick off in the last act, it has a couple of well-executed creepy moments, although if I’m still not 100% sure exactly what was going on, for some elements. It is, at least, trying to be its own beast, and is considerably better for that. This can’t overcome the fundamental, philosophical difference between myself and Irons. I think the found footage genre is a dead horse, still being ceaselessly flogged by unimaginative film-makers who use it as an excuse for poor production values. He disagrees, and while those values are better here than the no-budget norm, the lack of overall originality is terminal. I can only say: this is a disappointingly flat Chest.