I get the feeling we may see more of this kind of film going forward, operating at the boundary of technology and horror. We’re perhaps at the same point in tech where we were with religion in the seventies. There, questioning its place in our life helped lead to The Exorcist and The Omen. I wonder if similar concerns about the ambivalent and ever increasing role of tech in our lives, will lead to more movies where it becomes the villain? That’s what we have here. A security system appears to develop an agenda of its own, with some malevolent talents to help it achieve those goals. However, the execution isn’t able to get much beyond a well-made Lifetime TVM: The Wrong Burglar Alarm, perhaps. 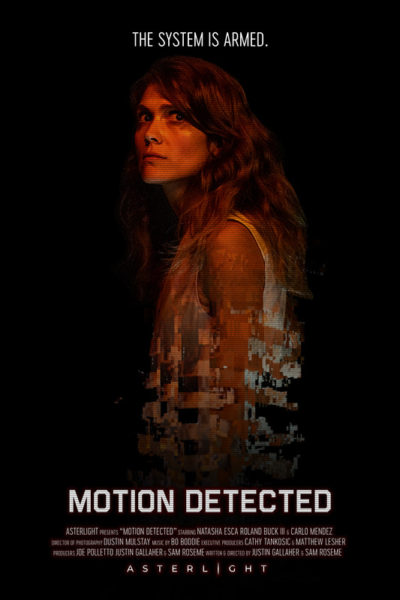 Eva (EscaKey) and Miguel (Mendez) have just moved from Mexico City to California, largely driven by her concerns about safety, with a serial killer called El Diablo operating there. The new house became available unexpectedly, but it’s gorgeous and comes with a state-of-the-art, integrated system of sensors, cameras and tech to keep out intruders – coincidentally called Diablo Control. Miguel gets called back to the capital on business, leaving Eva alone, and it’s not long before weird incidents begin to take place. Motion is detected by system around the house, when no-one is there, and Eva is increasingly troubled by visions of a masked figure and a small child, that can appear and vanish at will. Her psychiatrist (Flores) is sceptical, but a neighbour reports odd experiences with the Diablo system too.

From a technical point of view, this looks pretty slick, and there’s a good sense of the way Internet forums can cause, rather than soothe, paranoia. Other little things work too, like the way wait time for Diablo customer support is always six minutes, or the slew of online testimonials, all stating it is “the last security system you’ll ever need,” a somewhat double-edged statement. The problems are more at the macro level, beginning with a weird performance from EscaKey. At first it seems she can’t speak English, then does so fluently, switching between the two languages with ease, even if her accent seems to drift across the border.

It’s not very likeable either, coming over as hysterical and increasingly shrill, rather than sympathetically troubled. We did have to wonder, given the escalating weirdness, why she doesn’t just check into a nice AirBNB? The script has too many elements which are either casually discarded red herrings, or not resolved at all. The internal rules are never established well enough, leaving us watching a world where stuff simply happens. Some of it is effective in isolation, yet the overall impact never manages to get out of second gear. You can probably work out where this is going to end, well before it does. Though it’s unlikely to provoke much more than a shrug, whether or not you were able to see it coming.