What is humour? I found myself contemplating this kind of existential question quite a lot while watching this film. It’s clearly intended as a comedy first and foremost, spoofing a broad range of genres, including action, horror and blaxploitation. Yet, over its 96-minute running time, I laughed precisely once. That’s a quite spectacular level of misfire, considering how comedy is really not hard to do, at least on its most basic level. It takes an impressive amount of anti-talent to write a script that’s clearly supposed to be full of jokes, where they all fail to land. I dunno, maybe it’s just me. Except Chris was, arguably, even less impressed. So: what is humour? Answer: not this, apparently. 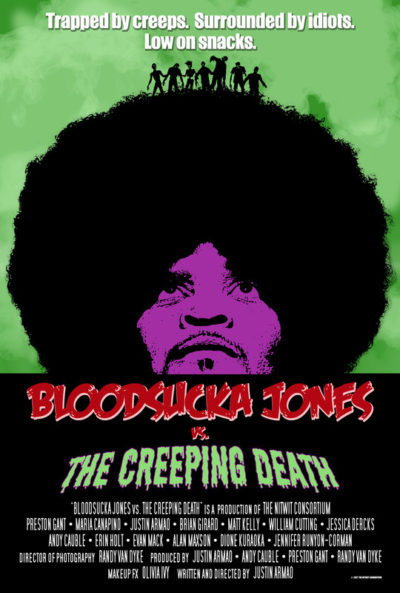 It’s a sequel to an earlier film, Bloodsucka Jones, which I haven’t seen. By most accounts that doesn’t matter, and there’s a little animated sequence to fill you in. The plot here, such as it is, has ex-vampire Stewart (Kelly) and his sidekick Kenny (Cutting), plotting to take over the world using a serum that turns people into zombies. The only hope of humanity is super-cool black hero, Bloodsucka Jones (Gant), along with his trusty and largely silent sidekick Vanessa (Canapino), and their ragtag band of idiots. Yeah, that’s about it as far as a story goes. Stuff happens, yet you would be hard pushed to call it anything as structured as a plot. Frankly, it makes the likes of Epic Movie seem like something by Christopher Nolan.

Still, we’re here for the jokes. Allegedly. Except it doesn’t feel like writer-director Armao and I have much in common there. It doesn’t help that it appears most of the cast have the comedic timing and delivery of a dead parrot. There were a number of times where I went, “Oh, I think this is supposed to be funny,” and in other hands, it might have been. Here, it falls flat with a relentlessness bordering on genuinely impressive. I should detail my one laugh: a Cookie Monster puppet henchthing gets caught by the zombies, and graphically disembowelled. It was truly unexpected and executed startlingly well. I also quite liked the synth score shamelessly riffing off eighties film music, from Rocky to Flashdance.

Otherwise, positives are hard to find in what feels embarrassingly like a bunch of pals mucking about, while one of them points his iPhone in their direction. It looks as if they probably had a good time, which is nice. The kindest thing I can say is, we don’t appear to be the target audience for this. I can’t imagine who would be; nobody I know. Oh, and a roller derby team shows up, in full costume, which may be close to peak cringe for everyone involved. The closing credits end by informing us Bloodsucka Jones will return, in Bloodsucka Jones and the Princess of Death. Pardon me if that feels considerably closer to a threat than a promise. I’m off to watch Undercover Brother.