This anthology takes place at a Mexican fun-fair, where the parents of Amanda (Castillo) have taken her for a treat. After the usual assortment of rides, sideshows and junk food, they end up at the tent occupied by La Lotería. While the word translates as “lottery”, this isn’t quite what its name might suggest, being more like picture-based bingo. The one-eyed woman in charge (Puyou) begins laying out the cards for the game, each of which is a short, horror-based story, based off the pictures as they are drawn. For example “El mundo” (“The world” in English) becomes a tale of a spacecraft circling Earth, whose two occupants are attacked by a very Alien-esque face-hugging monster (above). Naturally, the prize Amanda wins at the end, is not a pony. 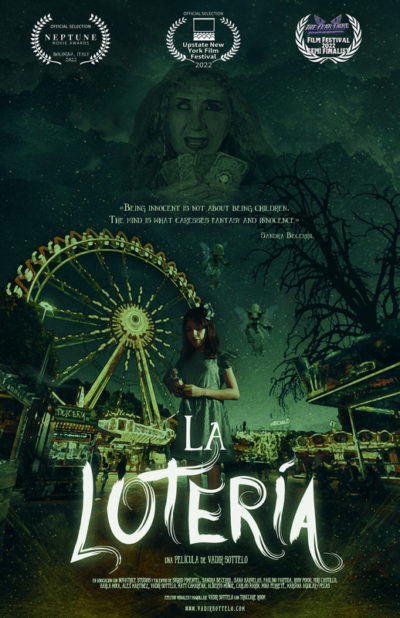 As well as the usual variability of anthology movies, this is so terse as to arguably be a collection of shorts rather than a feature. It runs a total of less than 59 minutes, including rather slow-moving end credits. Into that time, you have to cram no fewer than seven episodes – El Mundo, La Sirena, La Dama, El Cazo, La Rosa, El Corazon and El Valiente – plus the wrap-around story. As a result, some of the entries inevitably fail to do much, largely because they’re almost over before they have a chance to start. El Corazon, for example, lasts only two minutes twenty seconds, and consists of a girl going to a sweet-shop and having her heart torn out. That’s it.

There is a reliance on CGI for a lot of the segments, and the quality of these effects are variable, to be charitable. Sometimes, they work as you’d expect them to, while at other points, they seem almost copy-pasted onto the live-action footage – and in a bit of a hurry as well. This weakness did help derail (pun intended) one of the more effective entries, La Rosa, about a woman who finds herself stuck on the train journey from – or possibly into? – hell. It’s effectively creepy, and pricks nicely at the public transport phobia of being trapped in a small space with strangers, and no way out. Though I’m not quite sure how the rose played into things, beyond her picking one up off the platform.

I also quite liked La Sirena, which has a young woman keeping a mermaid in her bathtub, somehow having managed to maintain this secret from her father. Well, for a while, anyway. El Cazo was effective too, managing to imply child cannibalism, without particularly being graphic. However, even with the good stories, it seemed like they ended just when they were getting going. While it’s good to leave the audience wanting more, too many of these just leave the audience wanting; they feel like elevator pitches for segments, rather than having any meat on their bones. I think having fewer segments, and exploring them in greater depth, would probably have worked better.