For his feature debut, Connolly himself wrote, directed, starred in, composed the music, did all the post-production and, quite probably, made the sandwiches on set. I also get the feeling most of the actors were his pals (or, possibly, the local Rocky Horror shadow cast), almost none of whom seem to have any experience. This is, frankly, a terrible way to make a movie, almost always leading to disaster. The results here are certainly flawed, and guilty of the horrendous self-indulgence that inevitably goes with such a project. Yet it’s something of a shock to report that, once this gets going, the results are actually not so awful. If the only way to make a good movie, is by first making 10 bad ones, this is a surprisingly decent start. 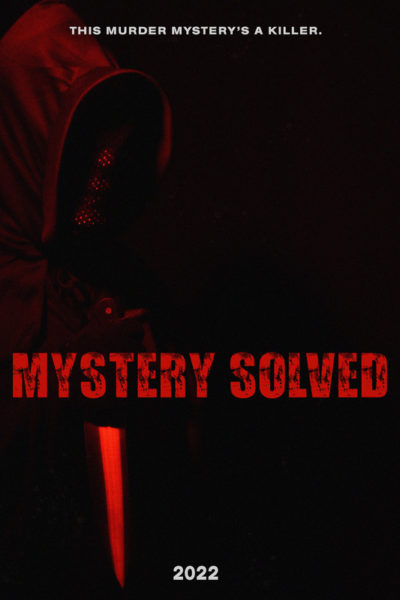 It takes place in a small California town, most notable for being home to a serial killer who murdered a bunch of people, then vanished without being caught. Nadine (Nossal) has been tasked with house-sitting the residence where the slaughter took place. [It’s an amazing house, with a gorgeous wrap-around porch and fabulous views. This also being California, I’m guessing $5 million or more] Despite the qualms and reluctance of her best friend, Oliver (Connolly), she decides to throw a bash on the 20th anniversary of his last killings, and to make it a murder/mystery party. What could possibly go wrong? Anyone whose count of slasher movies is non-zero, should already be predicting a masked killer, showing up to crash the party and assassinate the guests.

To start with that self-indulgence I mentioned earlier, an early scene is exactly that, a sequence of Oliver roller-skating. It’s excessively long, especially given the weak payoff of him running into a lamppost, and demonstrates why your editor should not be the director, writer and star. This kind of thing peppers the early going, though matters are helped by the decent chemistry between the characters. Casting your mates does hopefully mean you don’t have to pretend to like each other… It does also establish Oliver as, basically, a gay Final Girl: smart, somewhat introverted and hurtling like an out of control roller-skater towards a final showdown with the murderer.

The film hits its stride when the killings start, and Connolly’s appreciation of the horror genre helps those elements work better than the dramatic or comedic ones (the uneven performances, some approaching the level of Coarse Acting, are part of the issue there). It’s clear Connolly is a big fan of Scream, beginning with the opening, landline-based sequence. Even if I’m less of an admirer, there’s energy in abundance, and it’s well-paced. The self-aware tone – an eyebrow feels almost permanently raised – helps distract from the limited resources, and by the end, I was considerably more on board with proceedings than I expected. Connolly has passion, it’s clear, and that’s something which can’t be taught. Hopefully it can be beaten into talent and, while doing less would definitely be more, I’m curious where he goes.