There are times where we wonder whether we need to stress the “horror” side of our event a bit more when it comes to submissions. Admittedly, we do have a fairly broad definition, but there are always quite a few entries where we’ve turned to each other and asked, “Is this a horror movie?” This one is far from the worst offender: the same night we judged it, we endured another entry (not reviewed here) where the first 30 minutes were basically, “Aren’t roller-derby chicks cool?” In comparison, this is a model of terse efficiency. Though only relatively: for the first hour it’s considerably more like a drama with black comedy overtones. 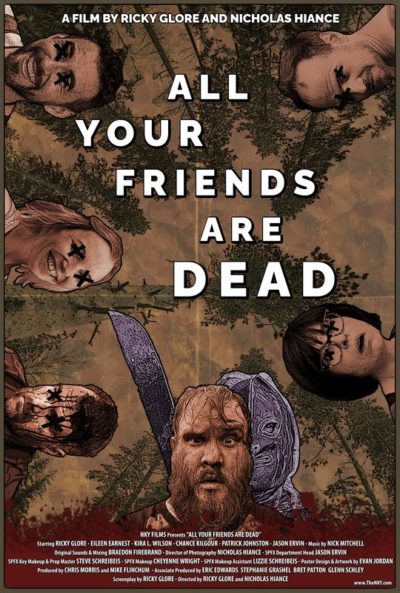 The focus is Matt Wilbee (Glone), who used to be somebody. Back in his days at high school, he was a sports star and among the most popular kids around. Time has not been kind to him. Now, he’s an overweight barback, with a failed landscaping company, reduced to drinking other people’s leftovers, and about to get thrown out of his house. From being the king of the hill, he’s now an object of derision, and heads to the forest campground where his fondest memories were made, to kill himself. Alerted by an email from him, a group of old friends stage an intervention. While they do prevent Matt’s suicide, it’s not an unmitigated success. Not least because of the presence in the woods of a masked figure, who begins picking off the former schoolmates.

At times, this section feels partly like a camping version of The Breakfast Club, with grown-up versions of the Jock, the Nerd, the Goth, etc. – as well as the Gay, because 2022. It’s not actually badly written or performed, for what it is. However, it’s not the kinda of (somewhat whiny) thing we would watch, if it wasn’t snuck onto our radar as being “horror”. If we want young adult angst about how life sucks, we’ll talk to our kids, thank you very much. And they’d better be supplying the avocado toast. The directors seem to have a better handle on black humour, such as Matt buying the rope for his noose, and the salesman talking him into their 2-for-1 offer, as well as signing up for the store’s loyalty scheme.

Things do eventually start to get a bit bloody… followed by becoming very bloody. While the relationship between Matt and the masked killer is not hard to work out, it’s played out in a way that ends up being quite engaging. The killer is almost acting as a Pied Piper, skipping ahead of Matt and acting as a stand-in for the psychotic urges bubbling in from within, after years of repression and internal torment. I think we’d have preferred had this been the approach taken from the beginning, without having to sit through the far too earnest discussions around the camp-fire. Though if we ever make it to Bellevue, we will definitely check out Darkness Brewing…