While the third entry returns to the original director, it abandons the numeral and adopts the titular approach used only for the sub-name – “Die Harder” – in part two. [I’m still waiting for them go with “The Die Hardening”] Indeed, it largely abandons the Die Hard concept overall: there’s no more having its hero forced to operate in a restricted location. Here, John McClane is instead made to run all over New York, at the whim of “Simon” (Irons), a terrorist who appears to bear a grudge against our hero, and who eventually turns out to be the brother of Hans Gruber. That it takes everyone so long to figure out the connection is one of the plot’s less believable aspects – unless McClane spent the rest of his career harassing German tourists in the Big Apple, in which case confusion would be understandable. 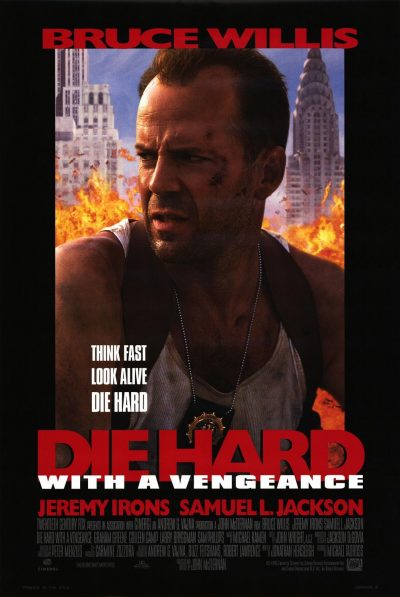 It does have some things in common with its predecessors though. The villain is again using terrorism as a smoke-screen for his real, financially-based objectives; in this case, robbing the New York Federal Reserve of billions in gold bullion. It also gives McClane a black sidekick to work with, albeit more directly, rather than over the radio. Zeus Carver (Jackson) is a shop-owner, who rescues McClane from the first of Simon’s tasks: sending the cop on a walk through Harlem, sporting a sandwich-board which reads “I hate niggers.” This angle, played largely for laughs, is one which likely seems in worse taste now than it did  then. [Though when shot on location, the sign was blank – the text was digitally added later, and on TV broadcasts, typically reads “I have everybody”]

I have the same qualms about the staging of multiple terrorist attacks in New York City. For the film opens to the catchy sounds of Summer in the City, before a Manhattan store-front explodes in spectacular fashion. At the time, the 1993 World Trade Center bombing was virtually the city’s sole experience of terrorism: events since then perhaps make it a less suitable topic for the light-hearted action flick we have here. On the other hand, we were jaw-dropped to hear mocking references to both Donald Trump and Hilary Clinton, more than two decades before the pair would face off in the 2016 presidential election. I suspect writer Jonathan Hemsleigh did not see that coming…

Generally, it’s an improvement over the previous entry in two significant ways. Irons makes for a much better villain (though his sartorial choices – particularly the vest – leave a great deal to be desired), and Jackson makes a wonderful partner for Willis. Carver takes none of McClane’s shit at all, quickly forcing the cop to acknowledge that he needs Zeus, much more than the other way round. From then on, it’s almost closer in tone to Lethal Weapon than either of the first two movies, and that adds a significant helping of fun. It’s worth noting the authorities here are generally competent, in contrast to parts 1 + 2, and help John more than they hinder.

At least initially, there’s a darker tone to the hero, probably the closest the films have come to the book which inspired the original movie. When we first hear of McClane, he is suspended for some undefined reason, and later on, his boss describes John as “about two steps shy of becoming a full-blown alcoholic”. John facetiously corrects him, mouthing “one step”, and nurses a hangover for most of the movie. However, it is a hangover necessary to the plot, as the bottle of aspirin which Simon tosses him turns out to be a key clue in tracking down the terrorist at the Canadian border, just when the villain thinks he has escaped with his ill-gotten gains. [Coincidentally, the following year’s Long Kiss Goodnight had a similar location for its finale: it was directed by Die Hard 2‘s Renny Harlin and also starred Jackson]

McTiernan keeps the pace relentless: while it may be contrived, the scenario means there always seems to be something explosive counting down to zero. New York provides no shortage of opportunities for mayhem, though some of these are not as well-developed as they ought to be: I’m still trying to figure out the point of the trip to Yankee Stadium. On the other hand, I did figure out a solution to the four-gallon water problem before McClane or Carver. It’s always nice when a film gives you a reason to feel legitimately smarter than the characters…