I’m a cat person. Never been a fan of dogs, I think this dates back to my days as a paper-boy, when I rapidly learned that certain houses had to be approached from the side, and by clambering over fences, to avoid the neighbourhood mutt. So, as far as I’m concerned, they’re all disease-ridden, ill-tempered, creatures, which start at annoying and go down from there. Therefore, a movie about a rabid St. Bernard, sounds like business as usual to me. However, this simply takes too long to get to the foamy chomping for which we’re here. According to Stephen King, this is one of his favourite adaptations of his work. Yeah, that’s more reason to question King’s judgment, as if his hacky Tweets weren’t enough. 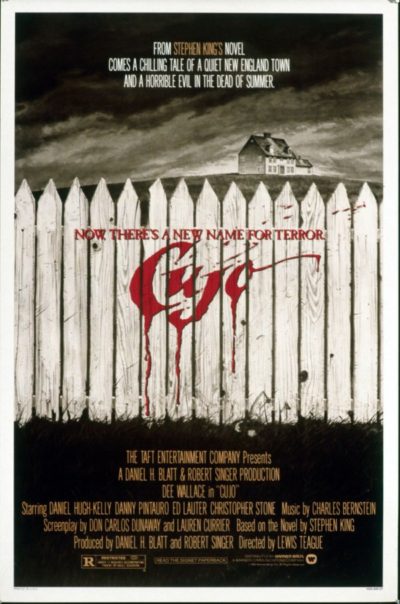 Really, forty minutes in, I was wondering if I had strayed into a Lifetime Original movie about the troubles of the Trenton family. I wonder if original director Peter Medak quitting two days in was a factor? I suspect the producers then got Teague for his work on Alligator a couple of year previously. Hey, one attack animal movie is much the same as another, innit? Anyway, there’s mom Donna (Wallace), her advertising executive husband Vic (Kelly), and their young son Tad (Pintauro). But Donna has a secret, in that she has been having an affair with her boyfriend from high school, Steve Kemp (Stone). Meanwhile, Vic’s job is giving him problems too, after an advertising campaign for breakfast cereal ends up creating a slew of bad publicity for the company. How will they cope with the strains on their relationship? And, more importantly, WHERE THE FUCK IS THE RABID ST. BERNARD I WAS PROMISED?

For we see Cujo chase a rabbit into a bat-cave, and get bit, but thereafter, the first half is far more jaw-jaw than gnaw-gnaw, to misquote Churchill.  Just as I was about to give up entirely, the soap opera stuff takes a back seat, as Donna and Tad pull up, in their misfiring Pinto, to the mechanic who owns Cujo. Or owned, since he’s now a party platter of Kennomeat chunks. The dog turns his attention to the new arrivals, who are unable to drive off, due to the failure or their car, and unable to call for help, due to the failure of mobile phones to be a thing for about a further twenty years. This is where the film finally becomes fun, and it’s easy to see why Wallace was treated for exhaustion for several weeks after the shoot. Cujo, at least, had stand-ins, being played by four St. Bernards, several mechanical dogs, a black Labrador-Great Dane mix in a St. Bernard costume, and occasionally, stuntman Gary Morgan in a dog suit.

It is, of course, all utterly ludicrous. The dog had taken out two grown men in seconds with decisive action. Yet he is unable to overcome Donna Trenton, who must be about ninety pounds, tops, and spurns multiple opportunities to do so – because the film needs to keep happening. Still, Teague shoots proceedings with enough conviction to overcome most doubts, and the steadily more blood-drenched canine is indeed a beast to behold. Makes me quite glad I don’t have a paper-round any more.