Firstly, despite Adkins’s presence, large and in front. on the sleeve, he is not the star of the movie. He is very much third-billed in this, and that puts him a long way behind numbers one and two. Mind you, I’d have been even more pissed if I’d watched this as part of Project Gary Daniels or Project Kane Kosugi. Both of them are one-scene wonders, with the former not even getting involved in any action, in his entirely pointless role as a barman. The true star is Nguyen, who plays Johnny. He’s brought over from Vietnam to Bangkok by old pal, Peter (Boonthanakit), who is now a cop in the local force. It’s in very unfortunate circumstances, as the body of John’s daughter, Angel – also Peter’s god-daughter – has been found. Turns out she’d been a prostitute. Johnny is not happy about any of this, and is intent at getting to the bottom of her death, regardless of the cost or body count. 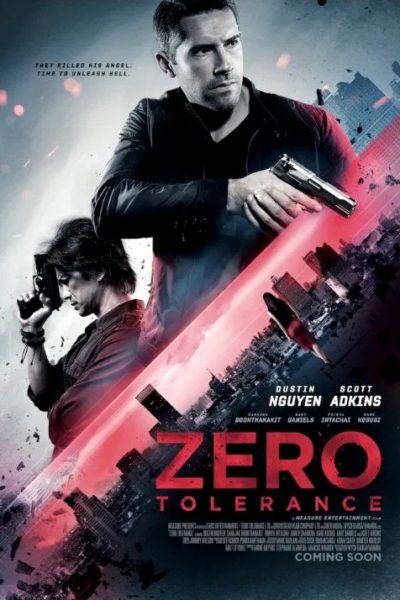 Kaosayananda seems resolutely committed to making anti-films. For example, in his zombie film, Paradise Z (a.k.a. Dead Earth or Two of Us), there isn’t a zombie seen until over fifty minutes in. This is somewhat similar, in that the ending completely flouts the conventions of the revenge-seeking action flick. Instead, Johnny discovers the truth about Angel’s death and… roll end credits. I guess you can only applaud the way in which this pulls the carpet out from under the viewer. But in terms of rendering the previous ninety minutes a complete waste of time, the approach taken here likely ranks not far behind “…and it was all a dream.” The structure is problematic in other ways, without any sense Johnny cared about his daughter while she still had a pulse, beyond the mournful flashback which opens the film. Peter provides a better emotional heart to proceedings, with strong family ties in contrast to Johnny, threatened by his pal’s “bull in a china shop” approach.

The action is no great shakes either. There’s one scene in a club, which seems to be trying to come off as a Thai version of John Wick, yet ends up as no more than a pale imitation. Except for the fluorescent paint with which the bodies of the bar girls are decorated; that was a nice touch. Otherwise, however, it’s almost entirely tediously generic stuff, with the talents of just about everyone involved – of which we’re well aware – all but wasted. We also get too many scenes of Johnny and Peter wandering round Bangkok after dark, talking to people. This is not the kind of film where you want to see that: you are here for the cracking of heads in righteous pursuit of justice. Except, as noted above, Kaosayananda decided he wasn’t even going to honour the latter part of that contract between film-maker and viewer. There’s a phrase for what I have for that kind of thing. Zero something. Wish I could remember what it was…