It was supposed to be a routine prisoner transfer. Of course, where’s the cinematic appeal in that? [See also: Con Air] Martin (Gutiérrez) is the straitlaced and by the book cop, while his partner on this mission, Montesino, is looser, and has a bit of a temper. The convicts being moved range from a white-collar fraudster to a Romanian mob boss. In a way surprising solely to the officers, on a lonely stretch of road, the truck is separated from its escort and disabled. The perpetrator, Miguel (Elejalde), isn’t able to get into the vehicle, but tells the passengers he is only interested in one of them, Nano (Criado). If they won’t give him up, he will kill them all – and an early demonstration suggests it’ll be death by fire. 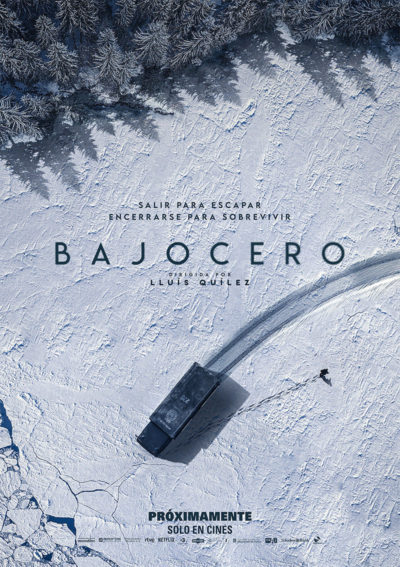 This is at its most effective in those early stages, largely confined inside the transport vehicle. We don’t know the scale or scope of the threat outside, while inside, the convicts and their keeper struggle to figure out what to do. Martin refuses to give up Nano, even if it’s the obvious solution, and one heartily endorsed by everyone else (bar Nano, obviously). It’s this standoff which powers, dramatically, the first half, and is very effective. Witness, for instance, the scene (above) where Martin holds off the prisoners with a gun that’s already out of ammunition – a fact the audience and he know, but the convicts don’t. There’s also good support from Callejo as apparently affable thief, Ramis. In some ways, it feels like a superior version of Panic 5 Bravo, made with a better approach to the generation of tension.

As the film progresses and the scope opens up, things become a little more formulaic and, consequently, less interesting. For example, there’s a car-chase, something that doesn’t quite fit the claustrophobic lock down of the earlier proceedings. Some of the decisions also seem a bit odd, such as Miguel’s choice to repair the truck and drive it quite some distance, in order to dump it through the ice of a frozen lake. [It’s on the poster (right), so not really a spoiler] What was wrong with pouring petrol in the windows and setting it ablaze, as earlier? The apparent lack of any response from the authorities until the very end, is also odd, even if the lack of cellphones is explained as an anti-hijacking measure.

Things do recover with a decent finale, as we discover Miguel’s motivation, and Martin is forced to consider whether his steadfast adherence to the rule of law, is in the best interests of genuine justice. There are times, the film suggests, when the best route to the latter involves disregard for the former. Though I have to say, the temperature doesn’t play as significant a role in proceedings as it might. A couple of characters complain about the cold, and that’s about it, save the lake mentioned above. It comes out of the chill cabinet, rather than the deep-freeze.