After a relatively fallow year in 1969, Hammer returned with a vengeance in 1970, releasing a half-dozen features. They began with a double-bill of this and Taste the Blood of Dracula, marking the studio’s return to the field of the psychological thriller, approaching five years after their last effort, The Nanny. This, interestingly, was originally going to be directed by Michael Reeves of Witchfinder General fame. He had approached Hammer with the idea, then titled Appassionata, in 1966 – they agreed, and wanted to use Joan Crawford, but were unable to get funding and the actress together. By the time the movie entered production, Reeves had passed away, dying in 1969. Hammer’s resident psycho-scribe Jimmy Sangster was brought in to rewrite the script, and TV director Gibson got his feature debut.

I could have sworn I’d seen this one before, but if I had, I did not apparently write a review – and so, it never happened. But I guess I was kinda right about thinking so, in that this bears more than a slight resemblance to Taste of Fear. Both films have an innocent, attractive young woman, showing up at a house in the South of France, entirely oblivious to the dark plans being laid for them by the inhabitants. There’s an escalating series of odd and disturbing incidents, as the threat to her escalates, until the final twists are revealed. Which, let’s be honest, may or may not leave a bit to be desired in the logic division. Still, it’s the friends we make along the way that matter, isn’t it? 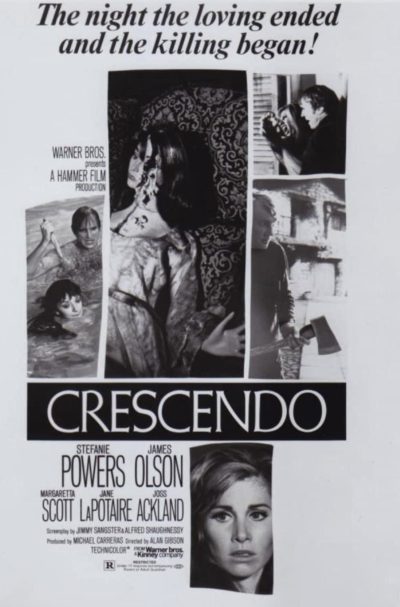 Despite all the similarities, I think I enjoyed this to a considerably greater degree than Taste. The story is a little bit more restrained, at least until the final set of revelations, which then deliver all the batshit craziness and shotgun toting you could want. Indeed, there’s even a scene in which a madman hacks his way through a door with an axe, to a room in which the terrified heroine is cowering. Hmm, The Shining, anyone? But I feel it’s the cast here which are the biggest improvement, with everyone at least good, and generally better. There may only be five speaking roles here, yet it’s almost always engaging, with every scene offering something to entertain or amuse, on some level.

The heroine is Susan Roberts (Powers), a music student, who travels to the Riviera home of Danielle Ryman (Scott). She’s the widow of composer Henry Ryman, on whom Susan is writing her master’s thesis. Danielle invited the student to visit, and use her late husband’s papers as source material. Also living in the house is Georges Ryman (Olson), Danielle’s wheelchair-bound son, along with a pair of servants. There’s slutty maid Lillianne (Lapotaire), and chauffeur/handyman, Carter (Joss Ackland), though neither exactly act like members of the below-stairs class. Indeed, everyone there has secrets, such as Georges’s obsession with the former love of his life, Catherine – to whom Susan just happens to bear a strong resemblance. That’s probably about the mildest and least warped of the Ryman family secrets.

The best performance comes from Lapotaire, who completely nails the whole manipulative slut/whore thing. She has made herself indispensable to Georges, and Susan’s arrival poses a threat to their cozy relationship, as is clear from their very first meeting. Making up in animal magnetism, what she lacks in conventional beauty, Lillianne has no hesitation about using her sexuality, and here, may be the first Hammer actress to go full-frontal (albeit very briefly, and underwater). Given her obvious acting talent here, it’s no surprise she’d go on to become a highly-respected Shakespearean actress. Though personally, I’ll always remember her as insane governess Madame de la Rougierre, in 1989 BBC series, Uncle Silas.

While the smallest role is Carter’s, he dominates every scene, simply by looming ominously (example, top). There’s one point at which he’s just cleaning the swimming pool in the background of a shot. And he’s still looming ominously. Scott is perhaps least effective, and I can certainly see how Crawford would have suited the role better. The problem is, knowing that impacted every scene Danielle was in. It felt like Joan was, if not quite saying the lines, perhaps sitting in the corner, with a large vodka on the rocks, passing sardonic comment. Olson is the biggest surprise. I’d been unimpressed with him in Moon Zero Two (1969), but he seems much better suited to this part, of a troubled man with major issues [I mean, dreams in which a copy of yourself arrives to kill you with a shotgun?], than as a heroic space cowboy. 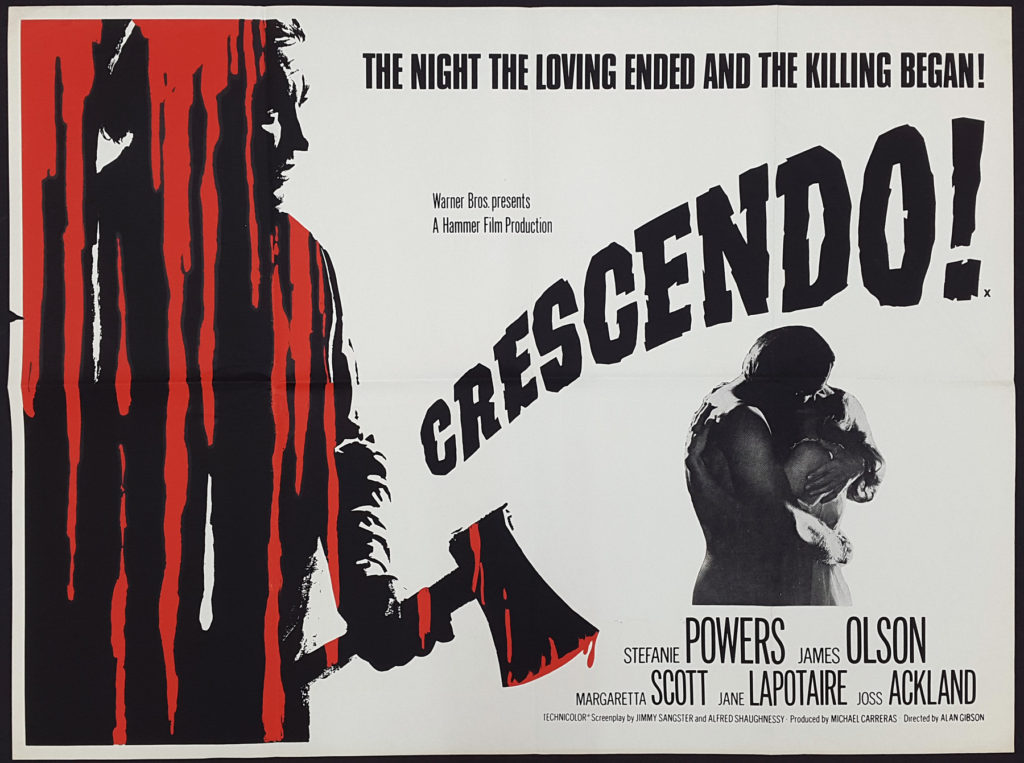 Finally, there’s Powers, returning from Fanatic, and she brings much the same naive likeability here, to good effect. Though as a bonus, she joins Lapotaire in shedding her top. [Powers is still taking her clothes off, in The Artist’s Wife. At age 76. Good for her. Google at your own risk] Hammer were clearly embracing the seventies, and the freedom offered by the recent MPAA film ratings in America, largely to be mirrored by the BBFC later in 1970. This trend towards sex would only accelerate going forward. I suspect the fact Hammer had stepped away from the genre may also have helped. There was a point when it seemed I was watching one of their psychological thrillers every other week, and that got old. The 4½-month gap since I saw The Nanny has been a decent palate cleanser, allowing this to seem fresher in my eyes.

Overall, I was surprised to see how critical many of the reviews were of this. I’m hard pushed to see any particular reason why it’s considered worse than its predecessors, and in content, it’s considerably more mature, in line with the adult themes which it develops. As mentioned, it contains some really good performances, something which wasn’t always the case in Hammer’s psycho thrillers. About the only element I can criticize is the soundtrack, where Tubby Hayes’s sax noodlings caused Chris to wonder if Hammer were now making porn films. Actually, compared to their earlier output, perhaps she wasn’t all that far off the mark.