Last week, I wrote about the horror world changing in 1968, and how Frankenstein Must Be Destroyed seems like Hammer’s reaction to that. But horror wasn’t the only genre for which 1968 was a historic year in cinema. Science fiction saw the release of 2001: A Space Odyssey, setting new standards for visual effects and a realistic depiction of life in space. But it would take a far kinder reviewer than I, to suggest this should be considered Hammer’s response to Kubrick’s epic. Indeed, there’s probably good reason this is the only Hammer film – and a rare British movie – to be given the mocking treatment by Mystery Science Theater 3000. There, it sits between Robot Holocaust and Untamed Youth, two movies likely closer in quality than 2001.

One interesting aspect is that, as shown above. Moon Zero Two takes place in the year 2021: it’s now only two months into the future, as I write. Well, when I say, “interesting,” it might have been – had the makers put any effort into depicting the world of 50 years in the future. Instead, the world of 2021 looks almost exactly like the world of 1969 – only with brightly coloured wigs and a great deal more pleather. Outside of one impressively large screen, there’s no sense of any attempt to predict the shape of things to come. Even the main spaceship here, looks like a dead-ringer for the Apollo 11 lunar module. [That landing, which took place three months before the film’s UK release, gets referenced specifically at one point] 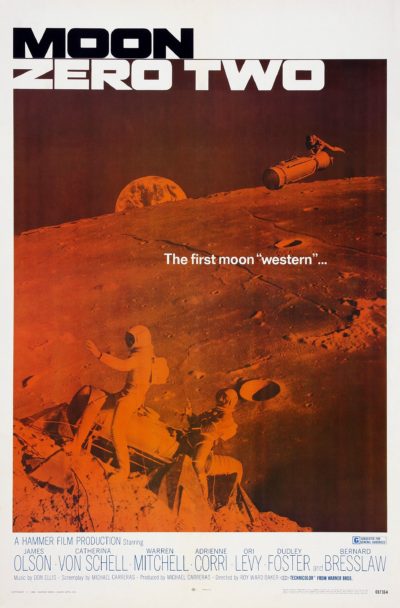 I think it may also have been a misstep to start off with the cutesy animated sequence we get. I see what it’s trying to do. The US and Soviet space programs spent so much time and effort opposing each other, that it allows other nations to develop the moon instead. But an opening title would have put that over just as well. Instead, one of the lines from the MST3K commentary rings true: “Is this a Pink Panther movie?” The cartoon opening – which also seems to go on forever – sets a light-hearted tone, that the rest of the movie is ill-equipped to match. Instead, it’s basically a Western in space, beyond the wildest dreams of Joss Whedon, and to the extent the poster (right) flat-out admits it. Again, this seems like a very lazy approach to writing science fiction.

The plot has two, apparently separate, threads involving space jockey Bill Kemp (Olson). He abandoned corporate employment for a freelance career, piloting his rust-bucket craft, Moon Zero Two, about the satellite with loyal sidekick, Korminski (Levy). A pair of different employment opportunities come his way. The more pleasing to the eye is Clementine Taplin (Schell), who wants his help to find her brother, a prospector for minerals on the lunar surface, who has gone missing just before his claim was set to expire. The other is through his old employer, sketchy business mogul, J.J. Hubbard (Mitchell). He needs Bill to capture a 6,000 ton sapphire asteroid and wrangle it to the moon’s surface. That’s a bit illegal, but with Kemp’s space license coming under threat, he doesn’t have any better options. These two jobs, to no-one’s surprise, eventually turn out to be closely linked.

I have to say, the special effects grade out a bit better than I expected. There are times where the use of models is painfully obvious, such as when the lunar rover is rolling across the moon. But most of them are reasonable, considering the era and relatively low budget, less than 5% that of 2001. They do, largely, get the silence of space right, which certainly isn’t always the case (I’m looking at you, Star Wars!). However, there are some maddening inconsistencies. For example, in a bar-brawl, the base’s artificial gravity gets deactivated, and people start moving in slow-mo and flying through the air. Yet when Bill and Clementine are exploring outside her brother’s campsite, which presumably benefits from no such system, they basically act like they’re walking on Earth.

Perhaps the most painful element is a dance troupe in the previously mentioned bar. They’re played by the Go-Jos, who were the first set of dancers on Top of the Pops – yes, before Pan’s People or Legs & Co – though it appears they sent their B-lineup out for this movie. I think their Native American themed performance probably created most cringe, personally. Also in the cast are the man who was almost Frankenstein Bernard Bresslaw, and most surprisingly, Carol Cleveland, best known for her work with Monty Python, as a hostess. However, it’s studio regular Michael Ripper who perhaps makes the greatest impression. Truth be told, it’s probably less Ripper than his stunning plaid shirt, apparently made of PVC. It looks like it was converted from a tablecloth at a greasy spoon, and I can almost see gravy stains. 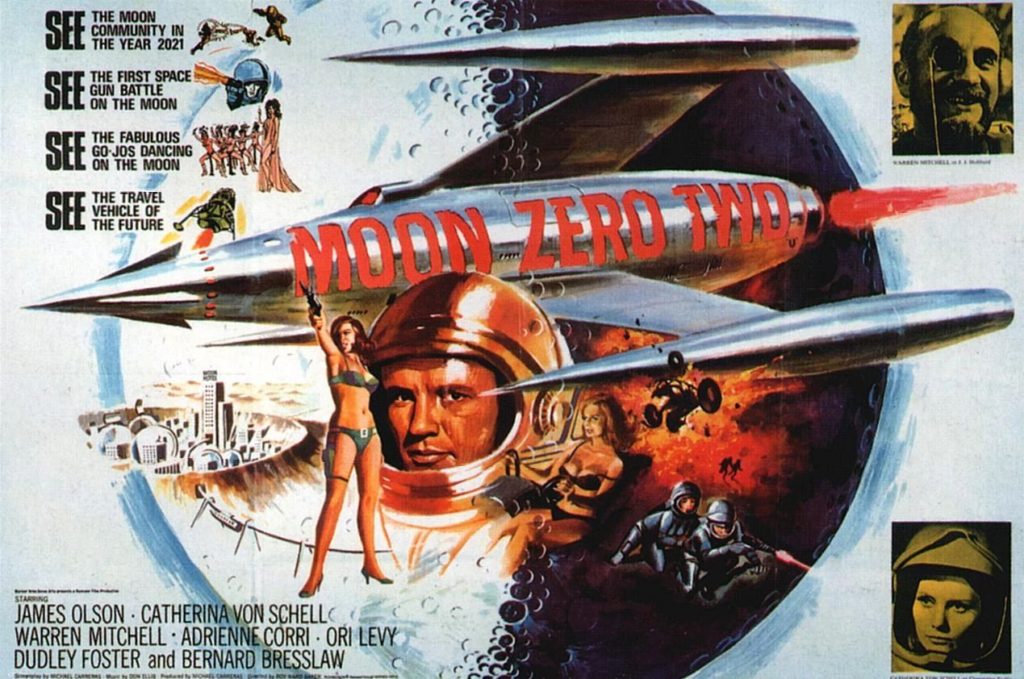 I didn’t mind those elements so much, to be honest, even if they are likely why MST3K homed in on it, for at least they are entertaining. That’s more than can be said for the lengthy sequences of people crossing the lunarscape, either by vehicle or on foot, which are painfully dull. Maybe they were considered exciting and innovative at the time of the film’s release? If so, they definitely have not aged well. The excitement to be found here is spread as thin as the air on the moon, without much sense of escalation. There is a lunar gunfight, which is kinda new – turns out, modern guns would actually work in a vacuum, the cartridges including the necessary oxidizer. However, the film then goes on for what seems like another hour, after feeling like it should have been the climax. It’s certainly easy to understand why few of those involved have anything good to say about it.

Baker, who had done such a good job with another SF film, Quatermass and the Pit, was unable to achieve escape velocity here. Interviewed in 1992, for Starlog #183, it was clear this was not a film of which he had fond memories. “Moon Zero Two was a bad picture. It was hopeless, and never got off the ground. We didn’t have enough money to do it properly. It was crazy – a complete muddle. And, it was undercut by the fact that you could turn on the television and see Neil Armstrong jumping about on the real Moon.” Fortunately, a new decade would bring a slew of films from Hammer for which competing with reality would hardly be much of an issue.