It’s difficult to discuss this film without straying deep into spoiler territory, so apologies if this review involves hand-waving and vague hinting. After David (Soulis) completes his engineering degree in the North of Sweden, he proposes to girlfriend Nadja (Blondell), and they move back to Stockholm so she can study to be a doctor. 18 months later, with their relationship on rocky territory, he organizes a weekend back in the North, aiming for some quality time with Nadja. It doesn’t go well. They encounter some local racists – they’re an interracial couple – and things escalate as Nadia keys their truck. Then, way out in the wilderness, in the middle of the night, they wake to find the titular scarlet circle on them, and it becomes clear they are being targeted. But by whom, why and to what final purpose? 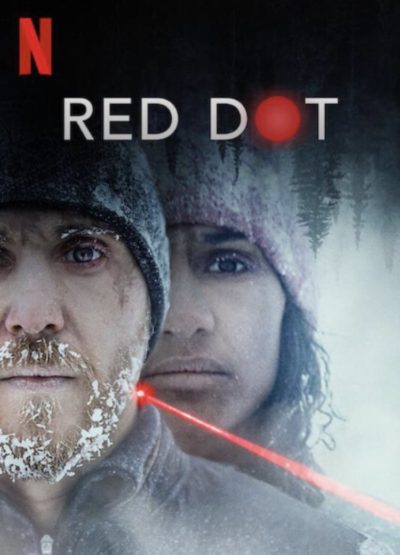 Darborg tries to pull off a difficult trick here. As mentioned, I can’t say much, but basically, he wants to yank the carpet out from under viewers in the final third, and swap the roles of protagonist and antagonist. The problem is, it doesn’t really work, and it’s mostly down to Nadja and David. They never managed to acquire my sympathy for a variety of reasons. Their petty bickering would be one – if I wanted to see couples fight, I’d watch The Jerry Springer Show. At least there might be lesbians too. But sheer stupidity was probably the greatest issue. As they run and fight their way through the snow-covered landscape, it becomes more like a FailArmy compilation of poor decisions. For example, there are the multiple occasions on which the unarmed couple manage to defeat an adversary, only to wander right past their body, without – oh, I dunno – picking up their gun. It feels as if the makers have never seen any other survival movie – and worse, think their audience won’t have seen any of them either. Going by the scathing online reviews, they’re wrong.

On the other hand, there are times when a film gets derailed because it’s trying to be too clever, and this is perhaps one of them. To some extent, it might have been better if had simply pitted urbanites against ruralists, even if the racial angle is perhaps too earnestly played, bordering on the woke. Despite the missteps, there are some decent moments of tension, and the chilly backdrop of Northern Scandinavia is a photogenic canvas on which things play out. Though if you’re a regular user of the site DoesTheDogDie.com, you probably want to stay well away from this one. This doesn’t count as a spoiler, since it’s basically doomed from the first appearance. [If a dog could take out a picture of its family, and talk about how it was looking forward to retiring…] The manner of its demise, however: woo-eee. That may well stick in your mind longer than any of the human characters, because when the big switch comes, it may well provoke little more than a shrug.