I’ve never been that much of a Guillermo Del Toro fan, outside of Blade II. I enjoyed Hellboy II: The Golden Army rather more than the original, and was unable to take The Shape of Water as seriously as Del Toro clearly wanted. He’s okay, I guess; some hits, some misses, and definitely not the Papal level of infallibility accorded to him in some quarters. His fanboys had their knives out for this reboot, as soon as it was announced Del Toro wasn’t involved, so it probably never had a realistic chance. Though I see their point; this is quite the bloated entity, and I wonder what happened to Marshall. In Dog Soldiers and The Descent, he gave us two of the best low-budget genre films of the 2000’s, then made some memorable episodes of Game of Thrones. But Centurion was only mediocre; this falls short of even that, and by most accounts his latest, The Reckoning, is no better. 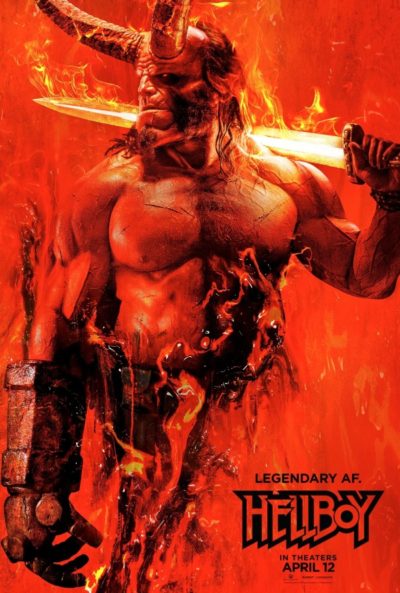 Aside of pondering how the once mighty are fallen, this simply doesn’t work. There’s too much going on, even at over two hours long. Many of the elements are given so little time, never mind not having room to grow, they barely have room to exist, between all the flashbacks, tangents and asides. They should have stuck to the core: Hellboy (Harbour) versus a very pissed-off blood queen, Nimue (Jovovich). Her bad attitude is, admittedly, understandable, considering she was dismembered by King Arthur and the pieces scattered to the four corners of the kingdom. Now, she’s literally pulling herself together, and has to be stopped by Hellboy. There. That’s your movie, especially with this film gleefully embracing its R-rating and all that entails. There are some gloriously gory set-pieces and Marshall’s eye for action remains solid, probably most memorably when the hero has to take on a trio of giants simultaneously.

Except here, the film can’t keep its focus for more than five minutes, scurrying back and forth like a coked-up chihuahua. Hard to say how much of this is the result of an apparently troubled shoot, with Marshall and producers Lawrence Gordon and Lloyd Levin reportedly pulling in different directions. Regardless of the cause, the results here have little or no narrative flow, choosing to pile elements on top of each other, in a mistaken belief that more is inevitably more. So we get Nazis, cameos that make no sense unless you’ve read the comic books, existential angst, flashbacks, Hellboy in a lucha libre bout, and a gigantic hut on legs. Per Wikipedia, the screenplay draws from four different sets of the comic books, to which my response was: “Only four?” Because it feels like twice that number. Truth be told, I think I dozed off at some point in the middle. I  suspect the flood of plot threads may have triggered some kind of memory overflow exception in my brain leaving it in need of a soft reboot.