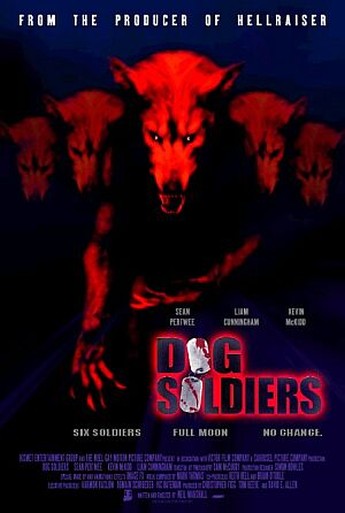 This blood-soaked werewolf flick is a chunky throwback to the good old days of Hammer, steeped in claret and Britishness in equal measure; basically, it’s The Howling versus the cast of Soldier, Soldier. A bunch of squaddies lead by Sergeant Wells (Pertwee) and Corporal Cooper (Trainspotting‘s McKidd) find their manoeuvres disrupted when they encounter the sliced n’ diced remains of a Special Forces team and their evil boss Captain Ryan (Cunningham). But it’s a full moon and the soldiers are soon on the run from the local werewolf pack, holing up in a farmhouse with Megan (Cleasby), an eco-scientist that knows a little too much about the wolfmen. As the fanged beasties rip and tear their way through the cast, Cooper rises to the challenge to wipe ’em all out before sun-up.

Pertwee and McKidd share the spotlight for most of the movie, confronting the supernatural with blokeish aplomb in several icky-yet-amusing moments. As the sole female cast member, former Holby City soap actress Cleasby has the burden of much of the exposition, and delivers it with a leaden performance badly in need of a charisma injection; the rest of the male characters include a sinister turn by Cunningham (RKO 281, First Knight) and Ultraviolet star Thomas Lockyer, swopping vampires for werewolves. Marshall wrote and scripted Dog Soldiers (his second flick, after writing Killing Time) and as such indulges himself a bit too much with in-jokes and pop culture references, but it’s hard to hate this blackly humorous monster romp, and while the effects are cheap, they are cheerful too and played to their strengths.