This opens in fine fashion, with ex-soldier Colton MacReady (Adkins) storming a Mexican cartel stronghold, to rescue his niece, Hailey, who’s being held hostage there. There’s a particularly good long single shot in this, which falsely whetted my appetite for what was to come. Colton takes Hailey back to her ranch home in the thoroughly non-existent “Santa Cruz” county of Arizona, to reunite with her mother Angela (Keats) and dodgy stepfather, whose criminal ties triggered the kidnapping. But cartel leader Fernando Garcia (Perez) is now in pursuit of Colton, both for revenge and to recover a flash drive he unwittingly acquired. With the help of corrupt local sheriff (Chinlund), Colton is forced on the run, before circling back to the ranch where mom and daughter are now in the grasp of the cartel. 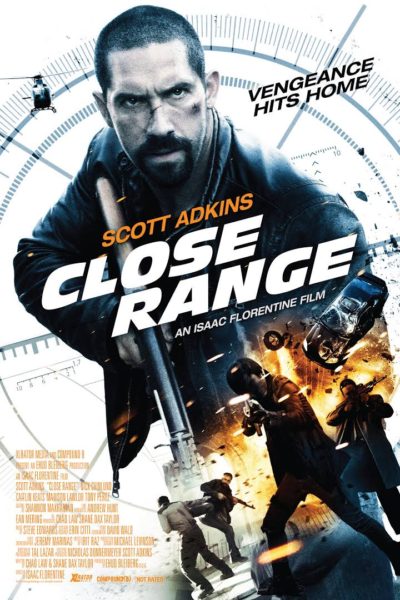 If there’s a lesson here, it’s that Mexico are clearly not sending their best. No, really: one former military guy proves far superior to a whole slew of Garcia’s narcominions, even if they get freeze-frame captions with their names (the complete extent of their characterization). It’s basically a rural version of Die Hard, though this is a much more serious hero. He may be wondering why he and his supposed sister have totally dissimilar accents. Or why her husband’s shirt changes colour from purple to black, between shots. Perhaps, he’s contemplating the reason this version of “Arizona” is 100% cacti-free – probably because it’s actually Southern California. Or the amazing ability of all the firearms here, to fire approximately eleven billion rounds without reloading.

It’s all quite disconcertingly sloppy, and I expected better. Florentine also seems to think he’s making a spaghetti Western, despite an opening screen which talks about outlaw ninjas, for no readily apparent reason. One example: Colton is painted as rather unlikeable, Adkins going for a troubled hero in the vein of Franco Nero or George Hilton. Nowhere is this intention more apparent than the end, where the last man standing has to choose between reaching for a gun or handcuffs. The director stretches out the decision to a ludicrous degree, far beyond the point where diminishing returns have kicked in. It simply proves that Florentine’s strength is very clearly in action, rather than inaction. Though that was already abundantly clear, from the extended tracking shot mentioned above.

Saving the film from complete disaster is the copious volume of fight sequences. Adkins and Florentine have worked together so often they probably finish each other’s sentences off, and the director knows how to make the most of the actor’s abilities. So this is never boring, at least. Simplistic and clichéd, sure. Or, if you’d rather put it more charitably, “straightforward and sticks to elements with a proven track-record of success.” It’s likely you will remember the occasional moments of ultraviolence, such as Colton stabbing an opponent in the crotch, significantly longer than the plot, characters, or Florentine’s failed attempts to channel his inner Sergio Leone.