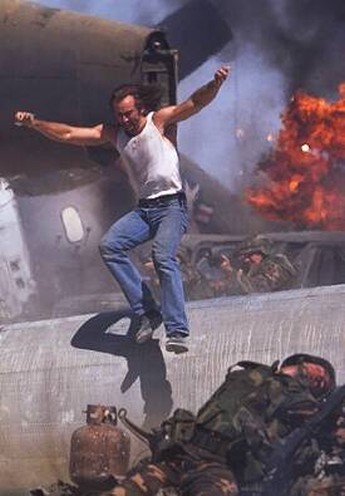 This one plays like a two-hour trailer, with a frantic pace that barely lets up, and editing during the action scenes that may leave you with a head-ache. However, it benefits massively from excellent performances, though less from hero Cage (not his own hair), as the parolled ex-Texas Ranger who finds himself aboard a hijacked plane alongside the REAL scum of the universe. He comes across as mildly wooden, and the scenes involving his family are dreadful, squirm-inducing stuff. Cusack is a better good guy, and the villains – Malkovich, Danny Trejo and particularly Buscemi – are all great. It escalates into a wonderfully implausible and mayhemic climax in Las Vegas, that defines “collateral damage”, in much the same way the film does the term “hyperactive and entertaining big-budget schlock”.