We watched this, simply because it was supposedly set in Arizona. The location is the town on the Mexican border of “Sasabe”, which sounded entirely made-up. But it turns out to exist… with a population of 11. I suspect the makers just threw a dart at southwest America and went with it. Going by the end credits, the film was shot in Hidalgo, which is a bit north of Mexico City. Though you’d really be hard pushed to say the film is “set” anywhere, since 95% of it takes placed inside the cramped confines of an ambulance. Four paramedics, sitting in Sasabe, make the ill-advised decision to cross the border to reach a man shot down in Mexico. But it turns out the victim is sought by some very nasty people, and before the first responders can get back to America, they are run off the road, and under siege. 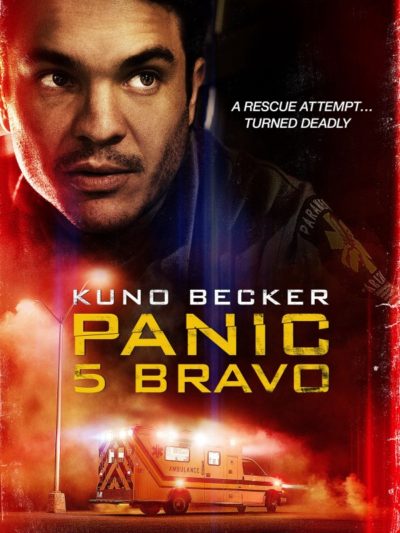 In many ways, the characters are incredibly cliched. We’ve got the hero, Alex (Becker), who is about to propose to his girlfriend; Richard, the veteran, who is on the edge of retirement; Josh (Rovzar), the rookie, who gets hazed brutally in an early scene that is just… weird; and Bobby (Papile), the stereotypical racist. I mean, one of them even takes out a picture of their family and stares at it, thereby basically sealing their inevitable fate. The script lurches between obvious elements like that or the inevitable revelation that one of the crew has been working for the cartel, and the “Wait, what?” moments that make no sense. This includes not just the hazing mentioned above, but probably also the ending which ties up the loose ends in a way that fails to make sense. It certainly doesn’t lead to the person responsible for the situation suffering any direct consequences for their action, leaving the audience with no sense of moral justice having been achieved.

Technically, I did quite like this, and considering an hour or more is spent without leaving the vehicle, it’s kept more interesting than I expected. When the ambulance gets hit, it’s as good a recreation as I’ve seen, with genuine impact. There’s also a sequence where those trying to get in, apply leverage in the shape of a pair of hostages. If you can get past the rather contrived nature in which we get there, the fact we only hear what’s going on outside is also surprisingly effective. But we have the usual problem with films where the same person writes, directs and stars in it – especially where, as here, Becker is apparently making his debut in two of those categories. His talents are not equally divided, and you end up with a film which, if well enough directed and adequately acted, is largely sunk by the poor script. It certainly doesn’t deserve the Albert Einstein (!) quote with which he chooses to end. This is nowhere near smart enough for that.