To begin by updating an earlier story, when I reviewed the misfire (albeit more in marketing than content) of the attempted Ghostbusters reboot, I concluded that in thirty years it would “be all but forgotten.” Turns out I vastly over-estimated its staying power. A mere five years later, it has become the Highlander II of the franchise, with the studio opting to all but pretend it never existed. Hence, we get this re-re-boot, which acknowledges and refers back to the original two movies, and has all three surviving members of the original team showing up (plus Annie Potts, and a surprise guest during the end credits) in supporting roles. Melissa McCarthy, Leslie Jones et al? Sorry, who are they again? 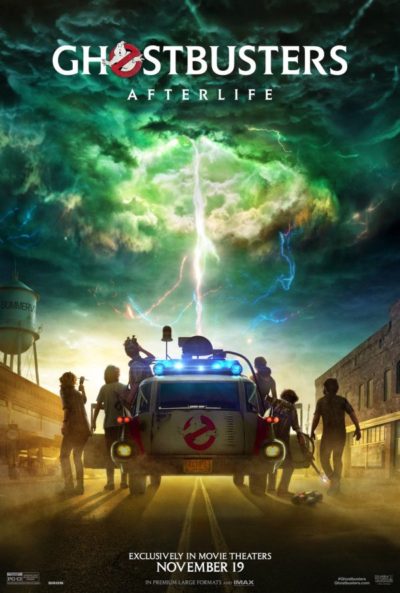 It also relocates from New York City to Oklahoma farmland, where Callie (Coon) heads after getting word her father had died, leaving her his house there. He has a bit of a local reputation as an eccentric, much to her embarrassment. Her kids Phoebe (Grace) and Trevor (Wolfhard) are more intrigued by the situation, and eventually discover their grandfather was Egon Spengler, former Ghostbuster, until he became estranged from his colleagues. They realize there was method to his isolation, keeping the powerful and malevolent creature known as Gozer in check. Inevitably, with the help of minions Vinz Clortho and Zuul, Gozer escapes, and it’s up to Phoebe and Trevor – and a little help from certain, more experienced veterans – to recapture the entity before hell is unleashed.

I think the main strength of this is a well-written script, which manages to make everyone likable. In Grace and Wolfhard, the makers found kids who really could be the late Harold Ramis’s grandkids, and they’re much less annoying than teenage characters typically are. The rural environment is a nice contrast to the strictly urban one of the original two movies, though I could probably have done without the rather blatant product placement for Walmart. The other weakness is, I felt that Trevor was underdeveloped, to the point that he seemed superfluous to the plot. Outside of driving the Ectomobile, it doesn’t feel like he has nearly enough to do. At least the racially and ethnically balanced cast of “new Ghostbusters” is never made a talking point.

There seems to be rather more warmth here than I expected. The original, even if PG rated (the PG-13 rating wasn’t introduced until the following month in 1984), still felt relatively mature in tone. This almost feels like it could be the fourth season of Stranger Things, which is a bit of a double-edged sword. However, the finale definitely hits the spot, and things are tied up in a way which provides some much-needed emotional closure… until a second post-credit scene opens the door to Ghostbusters 4. Or 5, if you insist on counting the One That Shall Not Be Named. Or possibly Ghostbusters: Afterlife 2. Regardless of what it’s called, I’d not be averse to seeing it, for this was considerably better than I feared it might be.