Long considered a “lost” entry in the eighties shot-on-video epidemic, this obscurity was written and directed by MacMillan, who had a role in Romero’s The Crazies, but seems to have received no American release at the time, just a Japanese (of all places) one, on Sony’s “Exciting Video” sub-label. That it wasn’t able to find a distribution deal, at a time when pretty much anything with two spools and a sleeve was getting a release to satisfy the demand for video product, perhaps tells you something. Claims the extreme gore were to blame for its commercial failure seem optimistic, shall we say. Certainly, like most lost horror movies, the world is not exactly much better for it having been rediscovered. 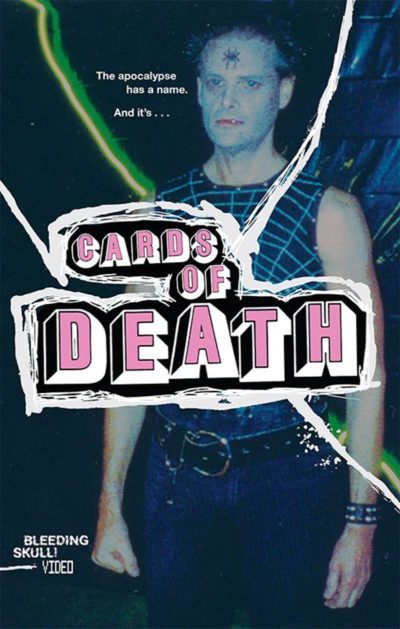 Filmed in LA, it’s about a gambling ring overseen by the psychotic Hog Johnson. It’s something to do with tarot cards, where the winner gets a lot of cash, and the one unfortunate enough to get the Death card is killed by the winner. One of the apparent victims is Captain Twain (MacMillan) of the LAPD, who vanishes after trying to get into the ring, having his nose carved off by Tracy, one of Hog’s equally psychotic sidekicks, using a cheese slicer. Remind me to decline the nibbles at their next soiree. The rest of the police force are baffled. Mind you, given their police work seems to consist entirely off roughing-up elderly prostitutes, the lack of progress in the case is likely not too surprising. Fortunately, the Captain’s son, Blly (Kologie), is able to get further, though before he gets an invite, multiple other corpses turn up, such as the priest with a gambling issue.

I think the main problem is the lack of energy present, across the entire cast and percolating through to the director. It feels as if all the actors have been dosed with Percodan, delivering their lines in a way that implies MacMillian equates slowness with dramatic intensity. Even when the characters move, it feels as if everything is too much trouble, meandering from place to place like reluctant kids on their way to school. Attempts to make us care about the victims are marginal at best: why bother when you can, instead, have a routine from some topless dancer instead? Though the video quality here is such, the nudity is largely unerotic. At one point, I couldn’t even tell if the exposed chest was male or female, which kinda dampens any sensuality.

The special effects, I will say, are decent enough, possibly even above average for the time and market, and occasionally the intent rises to semi-competent as well. Probably the peak is when Hog and his main psychotic sidekick, Cat, shower in the blood of a victim who is being crushed, before having sex. It’s the kind of twisted imagination the movie needs more of. What it definitely needs less of, however, is the end song, which feels like a one-take recording of warblings by an enthusiastic, but utterly unskilled, teenage songsmith. Any goodwill the film may have generated to that point was thoroughly washed away. It is, however, utterly eighties. I’ll embed it below, for your audio displeasure.