Isaac Pickman (Hughes) and his heavily pregnant wife, Emma (Stevens), return to his family’s ancestral home on an island off the Norwegian coast, 25 years after departing as a young child with his mother. The natives are initially unfriendly, until they discover Isaac’s connection to the place, when they become very welcoming. Too welcoming, as anyone who has seen this kind of film knows. But he’s in for a further shock. The local police chief, Renate Nygard (Crampton, sporting a credible Scandinavian accent), reveals his father hadn’t left his mother, but had been murdered in the house, a still unsolved crime. Anyhoo, would he like to attend a traditional local festival? There’ll be hooded capes! And chanting! [top] 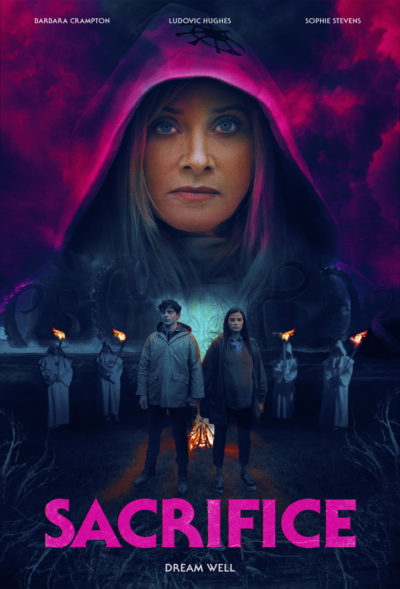 This is all to do with the old folk tradition involving “The Slumbering One.” From here, things go largely as you’d expect, especially if you’ve seen the extremely similarly-themed, The Deep Ones. Isaac’s behaviour becomes increasingly strange, while Emma is plagued by increasingly unpleasant nightmares [truth be told, the film-makers go to the “It’s only a dream” well, several times too often]. Naturally, she sticks around, far beyond the point at which anyone with sense would be Googling the Norwegian for “A one-way ticket to Oslo, please.” Eventually, it becomes too late, and the true purpose behind the occult shenanigans becomes clear. Both husband and wife will be in for a bit of a surprise.

The film relies heavily on the technical aspects to generate a sense of dread. The audio and music work very hard – probably too hard – at being ominous, and even a simple meal is drenched in more red than an Amsterdam brothel. Nobody in this town has regular light bulbs, it appears. The problem is, this style can only take a movie so far; there’s a point beyond which the plot and performances need to do their share. Neither are properly up to the task. Isaac is annoying, Emma is stupid, and the viewer is so far ahead of them both, they are no longer visible in the rear-view mirror. I did like the Scandinavian location work, which had us looking up house prices in the village of Bjørke. Lovely crinkly edges.

While technically based on a short story by Paul Kane, Men of the Cloth, the opening credits acknowledge the debt to H.P. Lovecraft. It does capture the same sense of underlying dread, however there isn’t the necessary sense of escalation to be truly Lovecraftian. It needs a much greater payoff though, rather than a couple of shots implying something lurking, languidly, just below the surface. Instead, perhaps the film’s only memorable moment is Renate’s almost mute, Valkyrie-like daughter, Astrid (Dahl), rising, sky-clad from the waters of the fjord in front of Isaac. It’s that moment which effectively seals his fate. Oh, the specifics may not be certain yet. But he’s utterly doomed. Even if he hasn’t figured it out yet, the audience knows…