A woman (Laurent) wakes, finding herself inside some kind of capsule, with no memory of how she got there, and no apparent way out. She also has a limited, and rapidly declining supply of oxygen, which will last… hmm, approximately feature length, thanks for asking. What are the odds? There is an AI (voiced by Amalric), she can quiz, though it seems kinda reticent about certain questions, preferring to ask our heroine helpfully, if she’d like a sedative. Communications with the outside world are patchy, working as and when necessary to the plot. Before her air runs out, can she figure out who she is, where she is, and how to open up the capsule – as well as decide if that’s something she really wants to do. 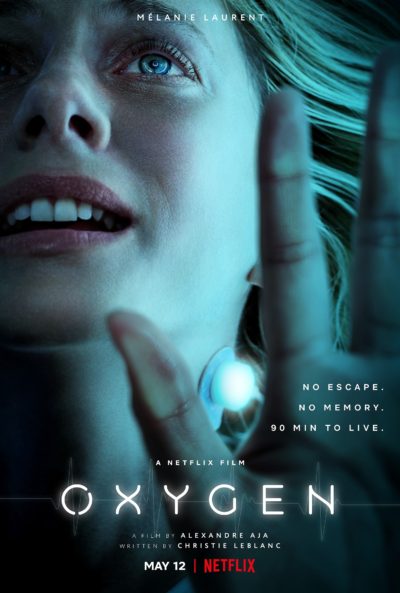 While I can see the appeal of these claustrophobic thrillers, they are always a tough ask for any film-maker. You are typically confined to a single location, with one actor, which puts a lot of weight on their shoulders. Many of the usual tricks in the cinematic locker are restricted, or even removed entirely, with everything having to be shot in close-up, more or less. So you also need a director who is comfortable working within these limitations. Aja is better known for more explicit horror, such as the remakes of The Hills Have Eyes and Piranha 3D, and this is considerably more restrained. I’m not so sure he’s quite as comfortable building psychological tension.

It does continue his line of strong female protagonists, from Haute Tension and Crawl, though initially, the heroine here does have a tendency to burst into tears which is a bit annoying. As things unfold, however, she buckles down to deal with her situation, and this becomes more engaging. It turns out, not everyone with whom she interacts has her genuine best interests at heart, with the AI being among them. Though in its case, it’s more a victim of its programming, rather than being genuinely malevolent. This does play into another moderate issue; the lack of a real antagonist. I can’t say too much there, without getting into spoiler territory, but it’s more a case of her versus circumstance, rather than any particular person or group.

However, it did manage to sustain our interest at an acceptable level until the final revelations, where the true nature of her situation is revealed. Does that work? The jury is still out on that one, I think. I can’t say the answers felt entirely satisfactory, and I have some obvious questions, not least about communications under the circumstances. A final conclusion would likely require a second watch of the film, and I don’t think there would be sufficient entertainment value to justify that exercise. Like many of the films Netflix has snapped up, this is a moderate-level effort in safe blandness: competently made, yet unlikely to generate passionate feelings of like or dislike. I suspect it’ll vanish into the depths of their library, and be largely forgotten.