On the one hand, this is a remarkable technical achievement, especially considering the budget was a mere $1.6 million. There’s no arguing, it looks as good as movies with ten times the budget – or even a hundred (looking at you, Terminator: Dark Fate). Creating such a VFX heavy feature on such severely limited resources is an amazing feat, and I imagine Hollywood will be running to Toia’s door. But on the other, it also illustrates the potential pitfalls of doing everything yourself. Toia directed, came up with the original idea, co-wrote the screenplay, did the cinematography, and was a producer, editor and VFX supervisor. That the film is also badly in need of some external input should be no surprise. His first cut came in at five hours, showing a man clearly in love with his own work, and even at a (relatively) trim 132 minutes, still runs a good forty-five too long. 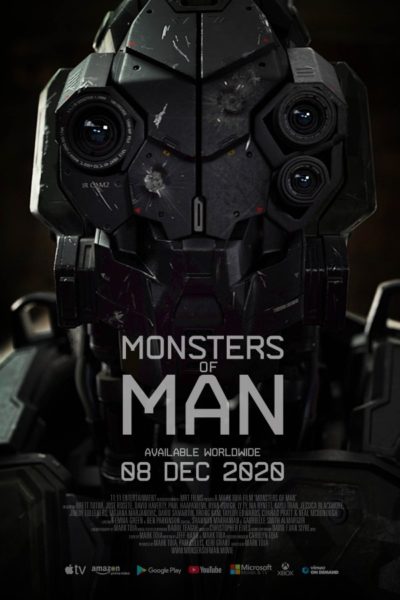 The high concept is solid. Four advanced AI robots are dropped into the SE Asian jungle by the US military intelligence complex for a test run. However, exactly what is being tested is unclear. The tech team think its just the system infrastructure. The deep state behind them (McDonough) have other plans, and woe betide anyone who gets in the way, In particular a party of doctors who have arrived in a local village on an ill-conceived and even more poorly executed aid mission. Fortunately, present in the settlement is a former US Special Forces operative, Mason Cartwright (Tutor), who is better suited for jungle warfare. Meanwhile, some of the tech team work to derail the mission, and one of the robots, after being damaged during landing, has become self-aware and is downloading knowledge at a disturbing rate. Though I dunno; it’ll probably just start saying “Citation needed” to everything.

There’s some good stuff here, and no denying Toia has a strong talent for shooting action. You get human vs. human, human vs. robot and even robot vs. robot battles, and some startling moments of gore. However, something like this really needs to be lean and mean. Unfortunately, the film is painfully bloated, with too many characters and, arguably, too much plot going on as well. The doctors, in particular, are entirely useless, and appear to have strayed in from one of the lesser Friday the 13th movies. Five minutes with them, and I was cheering for #TeamRobot. Eliminate them entirely, shrink the tech team down to one or two people, make it Mason and the villagers versus the robots, and this would have been significantly improved.

As is, the performances are almost entirely forgettable, save perhaps for McDonough, who does remarkably well considering he spends the entire movie in an office by himself. The rest have about as much personality as the metallic monsters, to the point they might well be called “Computer Geek” or “Troubled Veteran” as given actual names. It does come to life when the bullets fly, and there is just about an adequate amount of this. However, there’s a lot of other stuff too, and that’s considerably less fun.