This is less a mockbuster than a celluloid spoiler, in the same way we got Antz and A Bug’s Life, or Deep Impact and Armageddon. It came out six months ahead of the “other” one, Hercules, starring Dwayne Johnson. But despite that advantage, it was both a critical and commercial failure. It’s easy to see why. The main emotion generated is an appreciation for the better movies from which Harlin lifts. For instance, he adopts the slo-mo carnage from 300, without having Zack Snyder’s aesthetician eye for using it. Meanwhile, the story is basically Gladiator, with a hero possessing only a fraction of Russell Crowe’s charisma and presence. It also takes elements from TV series Spartacus, except is hamstrung by its PG-13 rating. 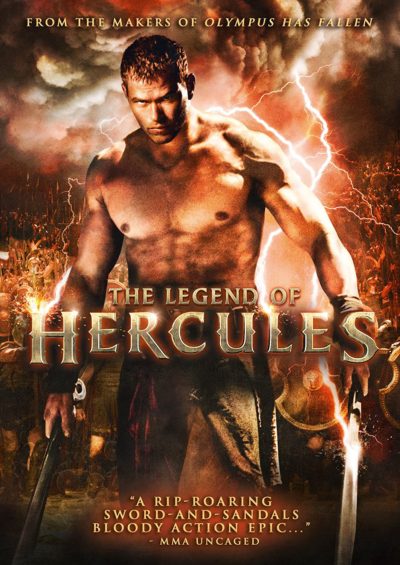 Hercules (Lutz) is one of the two sons of the tyrannical King Amphitryon (Adkins). Well, except Herc’s father was actually Zeus, who fucked Amphitryon’s wife in ethereal form [at least she didn’t get the shower of gold version]. The monarch is, understandably, miffed by this and favours his other son, Iphicles (Garrigan). Amphitryon eventually tries to kill Hercules, only for him to survive and begin life as a gladiator. After a bit, he gets bored or something, and joins the growing rebellion against Amphitryon and Iphicles, the latter of whom is also intent on taking Hercules’s sweetheart, Princess Hebe (Weiss). Inevitably, it leads to a final showdown against his not-father. And I’ll have what Amphitryon is having, since he does not appear to have aged a day in the 20+ years since we saw him at the start of the film.

This starts really badly, with a battle sequence clearly supposed to be epic, but containing CGI of such disastrous flaws, I genuinely had to check this was made as recently as 2014. It wasn’t like this was a cheap knock-off: it cost $70 million, probably making it the second most expensive movie of Adkins’s career, behind The Expendables 2. You just can’t tell from what’s on screen. Oh, it’s certainly a busy movie; it’s just the quality of the graphics which leave much to be desired. The story is little better. After watching this, we put on the trailer for the other one, and that delivered a more interesting and coherent plot, in two minutes and thirty seconds, than this does over its full running-time.

Adkins isn’t terrible. His performance is a bit shouty, and seems like a hungover version of Gerard Butler’s King Leonidas from 300. Yet I can’t say it’s inappropriate, and he does seem to be going for it with the gusto appropriate to this kind of legendary nonsense. The rest of the cast could have done with as much enthusiasm. Lutz makes no impression at all, and Weiss is almost as bland, save for one speech to Iphicles about how she’ll always love his brother. A couple of the gladiatorial battles aren’t bad, and we did like the “electric whip” sword Zeus provides his son at the end. Otherwise? Hey, we’re looking forward to watching Hercules.