While the horror-comedy is certainly not unique to this sceptred isle, there is a certain subspecies of the genre that does seem particularly English. The origins perhaps go back to 1952’s Mother Riley Meets the Vampire, in which Arthur Lucan in drag played opposite Bela Lugosi. Descendants thereof are a very broad range of quality, including Carry On Screaming, Bloodbath at the House of Death and Lair of the White Worm. But since Shaun of the Dead, the field has become increasingly crowded. The results remain hugely variable. While none have matched Shaun, unsurprisingly, the range of shortfall covers the quite good to the embarrassingly dire. In some cases, the invention stops at an alluring title, and this felt suspiciously like it could be one of them. 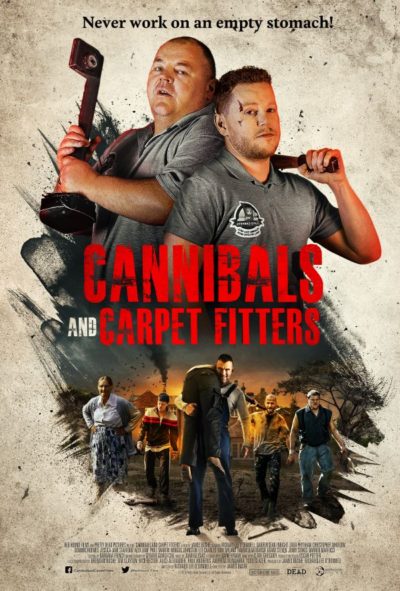 The name is certainly an accurate summary of the plot. A team of handymen from Cupid Carpets go to the remote home of the motherly Mrs Hanning (Stokes) to carry out a job. They don’t know, but quickly realize, they’re more of a GrubHub delivery for her brood of cannibalistic sons. That’s about it, as far as plot goes. This was originally a 19-minute short of the same name, and it doesn’t feel as if much additional thought went into the feature length version. However, Bushe and writer O’Donnell do a decent job of wringing just about every drop of entertainment potential from the thin premise.

I’d say the balance skews more towards the horror side. Or at least, the more successful elements are on that end. The sequence which accompanies the opening credits ends in a “Holy shit!” moment of almost impeccable execution. It’s clear Bushe has a deep love for jump deaths more than jump scares, with at least two similarly sudden fatalities elsewhere in the film. Definitely a useful technique to keep your audience’s attention, since they don’t want even to blink, for fear of missing something gruesome. The old Joe Bob Briggs saw about anyone dying at any time, is at least half-true for this. However, it is fairly clear the script loves its two leads, Colin (Enright) and Dean (also O’Donnell), so their peril feels less perilous as a result.

It feels a bit like a predecessor to the clunkily-namedm but perhaps slightly more enjoyable, Tribal: Get Out Alive. That also had Phythian versus Unexpected Countryside Cannibals, with her kicking rather more arse; here she gets just one, albeit decent, fight. This rolls past in an amiable way, without a particular sense of escalation, despite the large, boss level cannibal lurking in the tunnels under the house. It probably needs more invention, either in the plot or the variety of splatter resulting. Yet it surpassed expectations, even if those were admittedly around the ones generated by Strippers vs. Werewolves. This does make an effort, and as such, can only be appreciated, at least on some level.