In the late 1980’s, Russell teamed up with Vestron to make a series of cheap quickies, of which Lair of the White Worm was the second, following on from Gothic, with Salome’s Last Dance and The Rainbow to follow. While the others have their Incredibly Bad merits – particularly Salome, which includes future cabinet minister Glenda Jackson as well as Wolf from Gladiators – it is to Lair that we must turn to see Russell’s loopiness taking flight in its most fully-fledged form.

However, there was a fair bit of loopiness inherent in the source material, Bram Stoker’s last novel. While Stoker wrote a lot of books, he’s best known for Dracula – largely because the rest are pretty dire. This is especially true towards the end of his life, when he was suffering from nephritis, and spent a lot of his time doped up to his eyeballs. Lair of the White Worm was written shortly before his death in 1912, and represents a compelling argument for euthanasia. It’s available via Project Gutenberg, should any reader wish to wade through all 55,000 words of it. 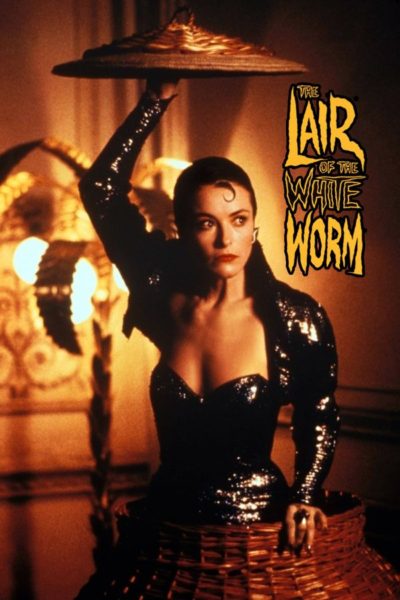 I did, and would suggest a Shaun Hutson book instead. But who better to film a book written by a certifiable loony than Ken Russell? And fortunately, his version is a great deal more entertaining. He ties it to folklore by bringing in the Dampton Worm, a genuine legend, and addresses all his usual obsessions: religion (and nuns in particular), class, and so much sexual symbolism it seems that every other scene has a phallic object in it. Snakes, garden hoses, cigarette holders, E-type Jaguars, pens – no Freudian opportunity is passed up.

Read this way, the opening shot is of an enormous twat – and I don’t mean Hugh Grant. It’s a huge, vaginal cave, which our heroes (and heroines) will later penetrate, and sets the tone for the entire movie. Viewers should thus permit themselves a snigger when the name of the cinematographer comes up – Dick Bush. Under other circumstances, I’d think this was Ken having a larf, but it’s a real person, one of Russell’s regular cronies.

The film starts with the discovery of an ancient skull by archaelogist Angus Flint (Peter Capaldi), digging in front of the B&B run by orphaned sisters Mary and Eve Trent (Sammi Davis & Catherine Oxenburg – the latter with a delightful dubbed Derbyshire drawl). When this comes to the attention of local land-owner Lady Sylvia Marsh (Amanda Donohoe), she is keen to get her hands on it, being the immortal priestess of a pagan snake-worshipping cult dating back at least to Roman times, who tends a huge snake in tunnels below her manor, to which she feeds Boy Scouts. She is keen to get her hands (as well as a very pointy dildo – the second time in three Russell movies such a device appears) on the pure & innocent Eve, for the usual sacrificial purposes. Flint and the Trents must battle against Lady Sylvia and her venomous minions, ably assisted by another local land-owner, James Dampton (Hugh Grant).

There, that’s the plot out of the way, for most of the highlights are not to be found therein, but in the execution, such as the dream/hallucination sequences. Some of these are flashbacks to ancient times, with a convent (whose nuns include Linzi Drew) being desecrated by Roman soldiers, while a giant white snake mauls a crucified Christ-figure. These video sequences are classic 80’s pop-promo stuff, redefining “lurid” with extreme colours and gratuitous visual effects.

Slightly more subtle – albeit in style, rather than content – is James Dampton’s dream sequence from which entire conventions of psychologists could be sourced. This sees him boarding Concorde, where he is tied up and watches Amanda Donohoe and Catherine Oxenburg roll around the floor, cat-fighting. Oh, and they’re both dressed as air-hostesses. Here somehow seems an appropriate point to mention that you’re watching neo-royalty: Oxenburg’s mother is Princess Elizabeth of Yugoslavia, second cousin to Prince Charles. [Appropriately enough, Oxenburg has played Princess Di on not one, but two occasions.]

The dialogue is wonderfully ripe, littered with the sort of double-entendres beloved of the Carry On series. Some choice examples: 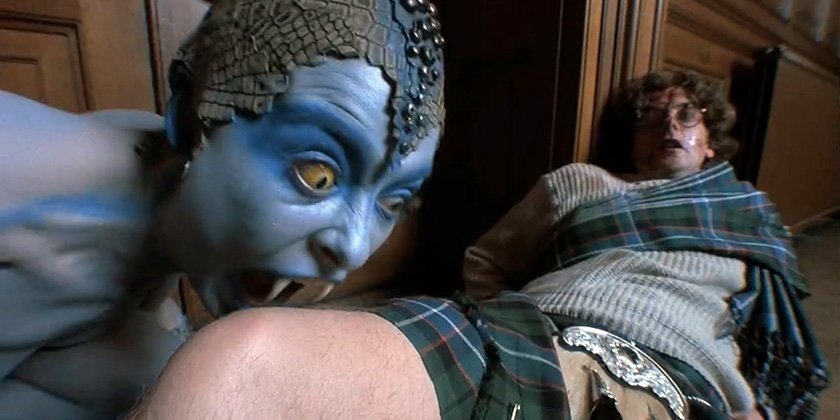 The main saving grace is that everyone realises – to borrow a line from Russell favourite Oscar Wilde – the importance of being earnest, with material of this sort. The slightest snigger and it would topple over from trash into farce; no-one slips up here at all, even Hugh Grant who delivers what Russell reckons is the best performance of his career, and I’m inclined to agree. However, it’s Donohoe who is the key to the film, and is totally brilliant, especially when spitting out lines like “Poor little virgins, masturbating in the dark.” Do you want extra relish with that, Amanda?

This helps paper over some gaping holes in the script, which leaves a lot of things unexplained. For example, Angus manages to rustle up, in short order, not just antivenin, but also a hand-grenade and a mongoose – which is not (as far as I know) a commonly-encountered animal in rural Derbyshire. Up until the final monster, the effects are pretty good, with dismemberments, fangs and death-by-sundials all coming across well. However, when we get to see the worm, we wish we hadn’t: the front of a Volkswagen was used as the frame for it, and to be honest, they could have left it at that and the result would have been every bit as terrifying.

The main difficulty is trying to work out, how much it is all intended as a joke. That it’s a spoof seems obvious, yet when Russell says, “I feel I’ve added a more believable realism by making sure it’s done straight”, it’s hard to be sure. While I don’t agree with one review which said it was “D-grade horror trash”, to quote Roger Ebert, “This is the sort of exercise [Russell] could film with one hand tied behind his back, and it looks like that was indeed more or less his approach.” Regardless, its IBFS status is certain, and let’s put it this way: at his age, Ken is old enough to know better.