Sangster had been one of Hammer’s longest serving employees. Indeed, he joined the studio when they were still Exclusive Films, before the Hammer name was adopted in 1949. Initially a production assistant, he moved up to become a production manager, before being given the chance to write X: The Unknown in 1956. He’d go on to script many of their best-known and most revered films, including both The Curse of Frankenstein and Dracula. While Sangster had worked as assistant director on many movies in the forties and fifties, it was only here that he got full directorial charge. Hammer want to reboot Frankenstein for a younger audience, and Jeremy Burnham’s initial script was rewritten by Sangster, on condition Hammer let him direct it.

But this turned out, in effect, to be the On Her Majesty’s Secret Service of Frankenstein movies, with Bates’s ownership of the role being one and done. The studio scurried back to previous incumbent Peter Cushing and neither was Sangster asked to return. That likely tells you all you need to know about the film’s critical – and considerably more important to Hammer, commercial – failure. Poor Bates had been groomed by Hammer as a replacement for Cushing and Christopher Lee. But his scheduled starring debut for the studio became a supporting role in Taste the Blood of Dracula, and success eluded his other attempts almost as much. Following in Cushing’s footsteps is a job I wouldn’t envy any actor, so iconic was he in the role of Baron Frankenstein. 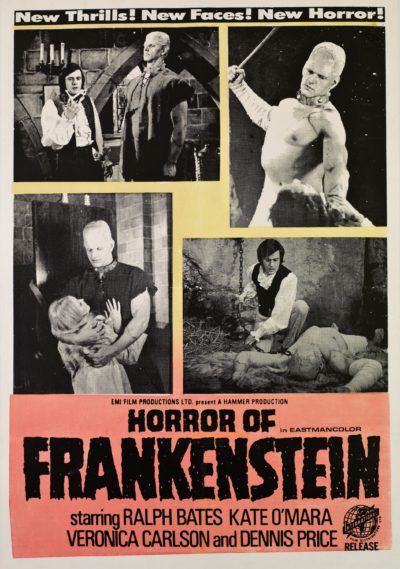 To the credit of both he and Sangster, this portrayal clearly goes in a different direction; there’s no attempt to ape his predecessor. While Cushing played the Baron as a cold, utterly driven scientist, who would interact with others only if absolutely necessary, in Bates’s hands, he puts the social in sociopath. We first meet him as a senior schoolboy, charming his classmates with a manipulative rebellion against their teacher, even as he arranges the death of his father in a hunting “accident”. At medical school, he exhibits an easy-going charm and is popular with the ladies. On returning to his home town from a stint at medical school, he dines with the local gentry and favourably impresses them, to the point that one, Professor Heiss, seeks to marry his daughter, Elizabeth (Carlson), off to the Baron.

Of course, they’re not aware of his bizarre experiments, in which he is building a creature from selected corpses, in accordance with a chart in his laboratory that numbers the various parts needed. In an example of the blackly comedic tone which is a strong element here, while at dinner with Professor Heiss, Frankenstein sees the number corresponding to the brain appear on his host’s forehead. Other ingredients come from his best friend, Wilhelm, whom the Baron electrocutes after being threatened with exposure, when Wilhelm has “had enough of this revolting work.”

Note to self: if I discover someone is a cold-hearted psychopath, “tampering with forces we don’t fully understand,” I will simply report them to the authorities, rather than informing them of my intentions first. Wilhelm isn’t the only one to make this fatal error. Housekeeper Alys (O’Mara), had also been the ‘bedwarmer’ to both this Baron and his father. She gets some up close and personal time with the monster, after literally saying to Frankenstein, “I think it’s time we had a little talk.” And when the daughter of the grave-robber (Price) who provides the Baron with corpses tells him, “I have to go to the police… I just hope they won’t be an embarrassment to you”? Well, three guesses what happens to her.

Though, again, this may be deliberate, a part of the dark humour with which Sangster infuses his script. If there’s a film with which this seems to have much in common, it may be Stuart Gordon’s Re-Animator. As well as the general tone, there seem to be a couple of elements in common, such as the relationship with the dean’s daughter at the university, and the friend who tries to act as a moral compass. But the most striking is probably the way both Herbert West and Baron Frankenstein hijack a beloved pet for their experiments; in Re-Animator, it was a cat; here, Victor kidnaps Prof. Weiss’s tortoise (!), only for it to turn a bit bitey. 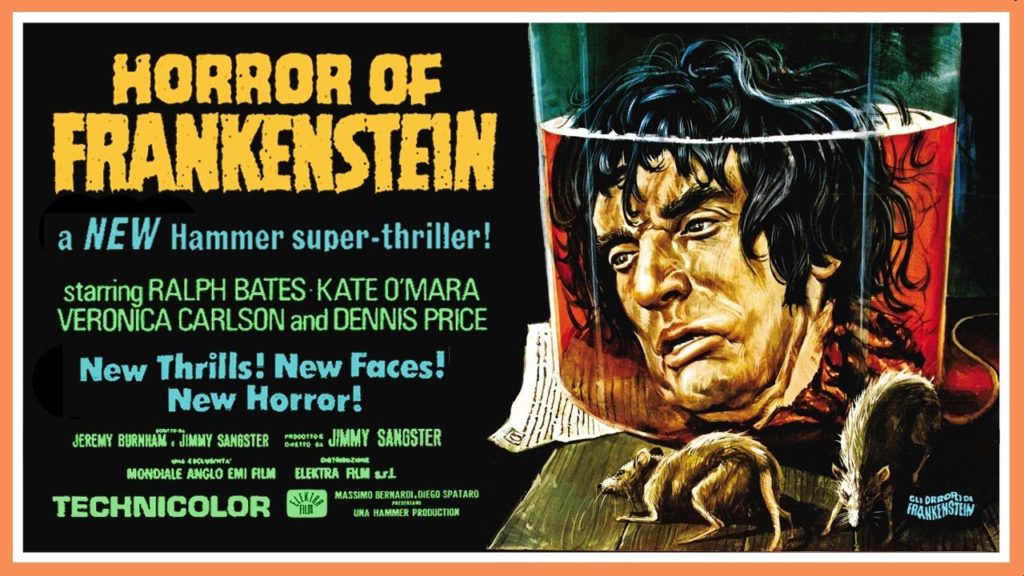 The ending is different to previous entries as well, in the Baron does not receive his just deserts for his crimes against morality and decency. After the murders come to the attention of the authorities, a small posse arrives at the castle, including a little girl who had witnessed the monster (played by Dave Prowse) in action. They question the Baron, who denies everything, and there’s no sign of the creature, though no-one thinks to look in the large – literally, monster-sized – vat in the corner. But the little girl trips a switch which floods the vat with acid, dissolving the creature and destroying the evidence. Frankenstein is free to continue, albeit having to start afresh. It’s considerably more morally ambivalent than we’re used to from Hammer, where evil is usually defeated soundly.

I did appreciate the different approach this took to the subject matter, which made this feel fresh and original. That’s something  necessary by the point you reach the sixth film in any series, as this was for the Frankenstein franchise. However, Bates is never going to be able to match Cushing, in a role he had made his own. I understand the studio’s desire to appeal to a younger crowd, though from a modern perspective Cushing doesn’t seem that old. In 1970, he was 57, which is younger than Tom Cruise is right now. What Bates may have provided in sex appeal for the ladies, is probably more than negated by his lack of gravitas. Admittedly, gravitas is  ranked rather low on the list of this film’s priorities.