After the success of The Quatermass Xperiment, Hammer were keen on a sequel. But negotiations with Q’s creator Nigel Kneale over the rights were stuck. So, what’s a B-movie studio to do? Clearly, the answer was: make a Quatermass movie in everything but name. That’s what you have here, with Jagger the token American, playing scientist Adam Royston, investigating a monstrous threat to the human race. Rather than external, from space, the creature bubbles up through a “bottomless” fissure in the ground. An ooze which nothing can keep out, it feeds on radiation, such as that emanating from the research lab in which Royston works. He and atomic cop Mac MacGill (McKern) have to figure out how to stop the hell-spawn before it decides to get a full-blown case of the nuclear munchies.

While sporting a very Blob-like monster, it’s worth noting this came out two years prior to the Steven [sic] McQueen vehicle, and it also has a jauntily British tone which helps set it apart. The Brob, perhaps? It’s also remarkably casual in the matter of radioactive hazards. The fissure appears in the middle of an army exercise, explodes and leaves the area virtually glowing like a novelty skeleton from the Fukushima gift shop. The military’s response to this Class 5 radiological hazard is, and I quote: “No point in keeping men out here all night. I’ll have the area roped off and put up a couple of Keep Off notices.” These security precautions prove inadequate even to prevent two schoolkids from wandering in, one of whom dies of radiation sickness as a result. No-one except his father seems too upset by this.

Mind you, this is also a world where Royston is able to take his work home with him. This means conducting rather ill-defined experiments involving highly radioactive shit, in his actual garden shed (shown, top). Given the complete lack of security, it’s hardly surprising when said highly radioactive shit goes missing – again, to an impressive lack of concern from all concerned. Maybe the fact that it supposedly takes place in Scotland is why no-one cares about the place turning into McChernobyl. Most of the place-names are fictitious, e.g. Lochmouth and Glen Cardinal. But a map on a wall shows the Highlands, and the Brob is projected to go “Right through the center of Inverness.” Which would be the best thing to happen to the city since the Clearances. [I was born 25 miles from there. #Forres4Life]

In the first half-hour, a steady stream of shots of people looking horrified left me wondering if we would ever see anything in terms of the monster or its results. Given the ropey effects in Xperiment, part of me hoped we wouldn’t. For example, it oozes past the security measures in Royston’s , sorry, “home laboratory” for a meal, without the audience seeing anything. This restraint ends in the X-ray room at the hospital – again, security there consists entirely of a sign on the door saying, “No unauthorized personnel allowed. Keep out.” Though the last sentence is in capital letters, so there’s that.

A doctor pops into this room for a spot of nooky with a Eurotrash nurse, whose whorish nature is clearly signalled by her foreign accent. Bleedin’ immigrants, coming over here and ruining the NHS…  [I was extraordinarily excited to hear she was called “Xena”. Sadly, it’s spelled with a Z]. Their make-out session, interrupted as it is by the Brob, does give us this lovely reaction shot, That’s followed by a close-up on the doc’s finger, swollen to “inserted into wasp’s nest” size (below). I’m presuming this reaction was a result of contact with radiation, rather than Zena’s toxic European vagina. I was about to laugh mockingly at this pitiful injury. And then his face melts off. Okay, it’s a 1956 style face-melting. But, still: well done. I can only imagine its impact on the audience at the time. 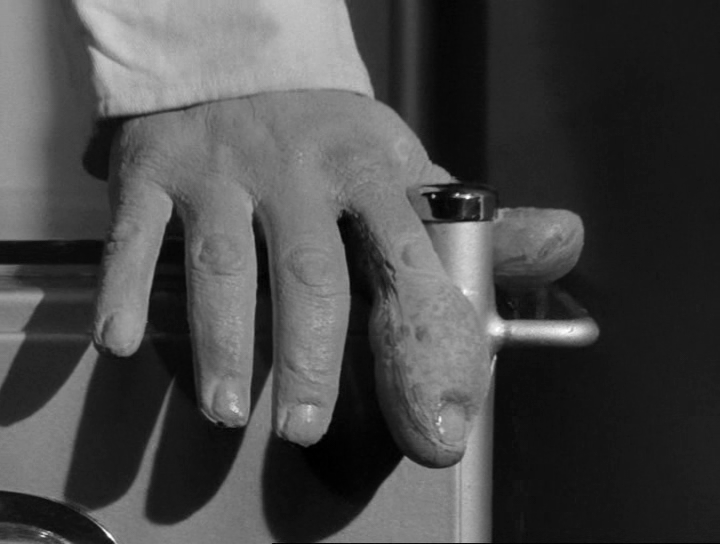 By this point, Royston has come up with a theory, that the Brob has crawled up from the core of the Earth, where it was trapped when the crust hardened. To test this, colleague Peter Elliott (Lucas) is bravely lowered into the fissure on a sling. I guess atomic researchers were cheaper to replace than cameras in those days. After he becomes the first person to meet Mr. Brobby and survive, the official reaction involves covering the fissure with concrete and putting up another “Keep Out” sign. In other words, basically the establishment version of drawing the curtains and not making a fuss. No prizes for guessing how well that works, i.e. not at all.

At just past the teo-thirds mark of the movie, 52 minutes in, we get our first glimpse of the creature, squeezing its way past the concrete with ease. And it’s game-on, as the Brob heads out across the countryside, in a slew of somewhat questionable model-work, as it looks for radiation, before returning to its lair, bigger after each meal. Fortunately, Royston has “Something I’ve been working on a long time now. A method of disintegrating atomic structure, obviating the resultant explosion.” And here we have something which can only be stopped by exactly that, just as Royston’s research bears fruit! Really, what are the odds? It’s still not perfect at suppressing the explosion. But good enough for government work. 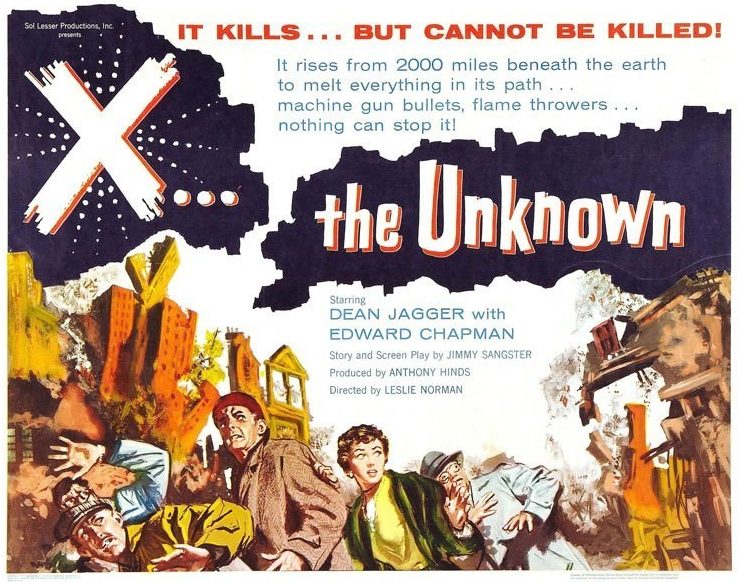 Poor Peter, who must be part of the Atomic Energy Authority’s Red-shirt program, ends up driving the jeep carrying the radioactive bait, to the edge of the fissure. The lures the Brob out, allowing Royston to turn his F-sized de-radiators – whipped up with impressive speed – on it, and blowing it up real good. Fortunately, the Brob’s lair was located in the kind of remote gravel pit with which Doctor Who fans would become familiar over the decades that follow. But the ending hardly feels triumphant: more like a small victory in an ongoing war.

This was the only completed work for Hammer by director Norman (whose son, Barry, was the BBC film critic for the last quarter of the 20th century). He supposedly came on board, after Jagger refused to work with original choice Joseph Losey, then blacklisted in Hollywood for supposed Communist sympathies. According to writer Jimmy Sangster, Norman wasn’t very interested in the process and proved difficult for the cast and crew to work with. He was briefly hired for The Lost Continent, but got fired early in production. Still, his work here proves perfectly serviceable, and it’s a solid slab of low-budget SF. It certainly takes the blob considerably more seriously than its American counterpart would.