Newly-married couple Monica (Speidel) and Mike (Herrmann) are on their very budget honeymoon in New Mexico. Stopping at the roachiest of roach motels, Mike is abducted by two men in an ambulance. Monica barely escapes the same fate, after discovering the motel owner is involved in the kidnapping business, and while running away, is fortunate to be picked up by good guy truck driver, Bill (Roth). Too scared to go to the police, she instead comse up with a plan to find out what happened: return to the motel, with Monica in disguise, and set themselves up as bait for a further abduction attempt. When that works, they turn the tables on the abductors and reveal a scheme involving the harvesting of body parts for medical purposes. Can they locate Mike before he becomes just another live organ donor? 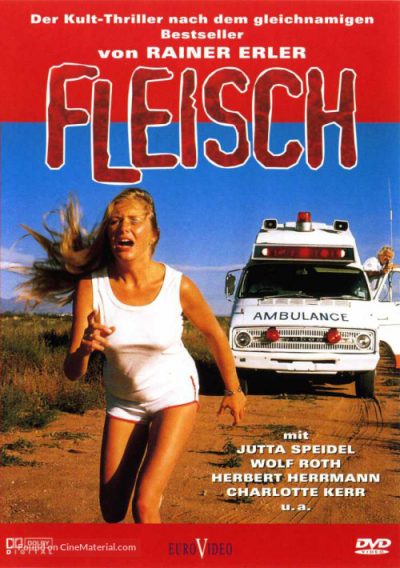 A German TV movie, it’s initially interesting to see their take on the American west. Similar stories about black market organ harvesting made in Hollywood, typically see the victims in “dangerous” locations, so I was somewhat amused to see the United States tarred with that brush. Erler does offer a fresh eye on the open landscapes and endless highways, elements which stand in contrast to his home country. The main problem is, it just takes way too long to get going. After Bill encounters Monica, they spend what feels like forever driving round before eventually coming up with a plan. I did the math. The two meet just after 20 minutes. They get back to the motel at the 48-minute mark, by which point your interest might as well have been carried off to the morgue – not least because this section feels twice as long. [The English dub does excise some of these scenes, which can only be an improvement]

It’s only thereafter that the plot really kicks in, and we find out the motive behind the abductions. I liked the use of a network of long-haul drivers, using their CB radios to follow the ambulance containing Bill and Monica, and it hints at a sub-culture of truckers as “knights of the road.” But everything thereafter takes an increasingly ridiculous turn, as our hero and heroine replace their abductors and infiltrate the shadowy medical organization behind it all, with ridiculous ease. In the final 25 minutes, the location shifts to the urban jungle of New York – again, seen through an outsider’s lens and looking thoroughly grungy. Though I was most impressed by the way Monica manages to climb out a window at the airport, cross the road, and is suddenly on the boardwalk at Coney Island!

I suppose I should allow for the fact that this was made for television in the seventies, and is overall about as good as that would suggest. But I’m mostly annoyed that an interesting idea, with potential for good execution, suffers from quite dreadful pacing, and consequently ends up struggling to sustain interest for its over-extended 108 minutes