Described as a “horror-comedy”, this appears to contain humour only at the “Produced in a factory which also processes peanuts” level. Pro-tip to Pantoja: next time you make a comedy, try and include something which makes people laugh, because this certainly doesn’t. Instead, it opens with painful, long and remarkably unfunny sequences in which Julie (Streble) is sexually harassed by Brad, the boss at her sales job, gets fired, and picks up employment with her gay bestie, Alton (Yackel), at a crime-scene cleaning company. It’s trying. It’s very trying, and only succeeded in putting our interest on life-support, before anything of significance happens. The horror element finally shows up when they’re sent to work on the site where a serial killer dismembered his victims. Only, the killer (Piacente) is still there, and there’s no way for the cleaning crew to get out of the building. 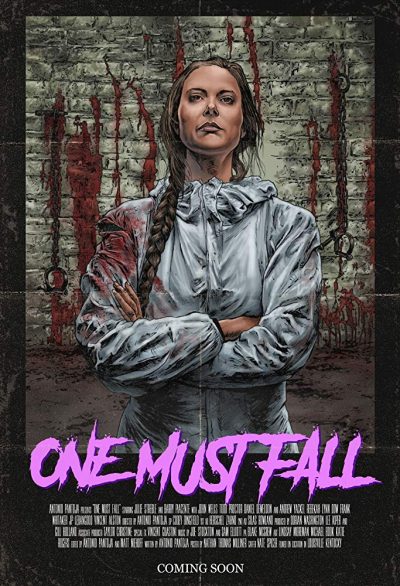 As well as the poorly-conceived and badly-executed laffs, there are a few other elements which make little sense. Why, for example, is it set in the eighties? This wasn’t even particularly clear, until I noticed the preponderance of phones with wires. But throwing posters of The Goonies and Jaws (um, that was a seventies film…) up on walls serves no apparent purpose. The same goes for the victims’ jobs. It could have been interesting if they had used their knowledge of crime scenes, or cleaning, to counter the killer. There’s even a creepy scene where Julie’s new boss Dorian (Wells) tells her about the worst clean-up job he ever encountered. But otherwise? Once the killing starts, they might as well be college students, or any of the other groups favored as prey in slasher films. It’s all entirely pointless.

Pantoja has a somewhat better handle on the straightforward horror angle, with some reasonably decent kills. It’s also interesting to have a Hispanic killer, not something I’ve seen before. Though even there, I could have done without the cliched religious ramblings, about which there is nothing original nor interesting. In terms of characters, it’s merely okay, once you get past the repellent creation which is Brad. While that’s clearly intentional, the caricature of a sleazy boss is so excessive as to remove any actual impact. Might have been nice if we’d seen him get the comeuppance he deserves at the hands of the killer.

It’s a thoroughly ludicrous concept overall, which expects us to believe the police leave body-parts scattered about the scene of mass murder. Or maybe this is another of those attempts at “humour”, like the cameo by Lloyd Kaufman? I’m also obliged to point out the film is guilty of one of the most blatant cases of review bombing I’ve ever seen on the IMDb. 32 reviews with the same date: August 20, 2019. All but one of them a “10”. The other is a “9”. These accounts have reviewed 1 Must Fall 32 times… and just four other movies between them. That the makers have to engage in this kind of thing, tells you all you need to know.