After a car-crash, Liam (Klattenhoff) wakes with almost no memories, but soon discovers a slew of corpses, all apparently the victims of a very sudden demise. Returning to his house, he eventually figures out that any living creature which comes within 50 feet of him drops dead. Except, it turns out, for Jane Doe (Sullivan). She is a similar amnesiac whose presence appears to restrain Liam’s new-found “talent” from operating. Going by what they can recall, Liam and Jane were together before the crash – but what was the contest? Unsurprisingly, the authorities are soon hot on their tails, as the pair try to figure out what’s going on, with the reluctant help of Jane’s husband, Sam (Donahue). 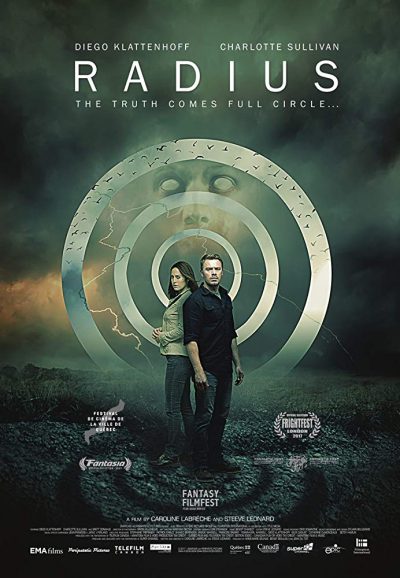 It’s a quite glorious premise, that draws you in entirely, simply from the synopsis. Probably inevitably, it’s also a hook which the rest of the film fails to match, and on this evidence, is not enough on which to hang a feature-length production. The writer/directors seem to know this, which is why there are parts where the “death by proximity” thing is largely forgotten, in favour of Jane’s marital difficulties or the previous disappearance of her sister. That’s her identical twin sister – purely so the audience will confuse the two for a bit. Mind you, the entire plot relies on my pet peeve of cinematic amnesia, the thoroughly contrived notion where characters’ memories return at the exact moments necessary to the story.

That is not the only such artificial fabrication. While we find out the cause of Liam’s condition, it’s basically down on the level of getting struck by lightning. It’s such a feeble explanation, they might as well not have bothered. Leaving it to the audience’s imagination would probably have been preferable. In the final act, the truth is finally, conveniently remembered. And let’s just say, being struck by lighting seems considerably more plausible than what transpires. It does perhaps offer evidence that they makers realized they had nowhere else to go with their original story, and had to inject an entirely unrelated angle, capable of providing the tidy conclusion needed.

It’s a shame, as when the film sticks to its original idea, it has its moments. Such as when Liam and Jane get separated – albeit courtesy of her pausing for one of those conveniently returning memories. With him in a full elevator, and her desperately charging down the stairs, trying to keep within the required distance, there’s tension to spare. Mining that seam of potential feels like it would have been far more effective at keeping the audience interested. Instead of an escalating crisis – the most likely result after the mass carnage unleashed in one scene – the authorities appear to give up the hunt in the final third. Instead, a bunch of Canadian rednecks (Canecks?) appear out of nowhere as the antagonists. The subsequent finale does have a little poignancy, though not much you couldn’t foresee. And its impact is severely diminished by all the missteps on the way there.