I hadn’t realized that Yeon, who directed Train to Busan, got his start in animation. But the same year as Train came out, he also directed this – part-prequel (it actually premiered before its live-action sibling), but probably more of a companion piece. It takes place at the beginning of the same zombie apocalypse, and tells the story of a completely different trio of characters. Like its colleague, it’s all about trying to survive – this time, in and around the titular location – as the epidemic quickly ramps up to disastrous proportions. 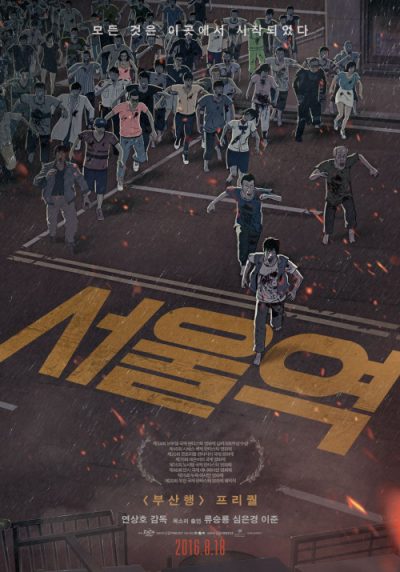 Hye-sun (Shim) is a former prostitute trying to escape from that life, but whose pimp/boyfriend Ki-woong (Lee), is seeking to keep her employed. After an argument, the two split up, but Ki-woong then meets Hye-sun’s father, Suk-gyu (Ryu), who is looking to re-unite with his estranged daughter. All of which would make for gritty social drama, except for the zombies. Beginning with an old homeless man, a virulently infectious disease is spreading, turning its victims into the traditional flesh-hungry ghouls. Though as in Train, they’re considerably more pacey than the Romero variety. They make mere survival a fraught process, never mind achieving any kind of family reunion.

The animation isn’t anything particularly special: decent enough, but obviously done on a low budget (not much more than half a million dollars, according to Wikipedia). I think the medium may take away from the raw intensity required for the zombie genre, replacing “in your face” realism with something that has a distancing effect. If you like, it’s the difference between a drawing of a dead body, and a photograph of a corpse. However, this is more than balanced by the script and the vocal work, both of which are excellent. After a slightly languid start, things basically don’t stop – this relentless pacing is something it shares with Train.

The voice-acting is also extremely good, and lifts up the animation through sheer energy. It becomes surprisingly easy to forget you’re not watching “real” people, such is the extent to which the drawings come to life – to the point that Chris was yelling at them. Another element of note is the hand-to-hand nature of the action, in contrast to American zombie films, which tend to be very gun-heavy. In Korea, firearms aren’t exactly common, and that certainly aids the sense of threat, when the only way to stop your enemy is by bashing them. In the head. Repeatedly. With whatever you can find. Here, being animated probably works for the film’s advantage.

Then, near the end, the story makes a hard left turn, delivering one particularly unexpected twist which renders the zombies almost irrelevant. It is, to some extent, a reworking of a common theme, “The zombies aren’t the biggest threat” – basically, the last five seasons of The Walking Dead. This comes both at the personal level and on a larger scale, with the authorities more concerned about suppressing the outbreak than saving individual lives. It provides a chilling cherry, on top of a particularly bleak-flavoured cake.