It has been four days since I watched this, and still can’t quite get my mind around the movie. Even trying to make a comedy set in Nazi Germany is an ambitious conceit, and I can think of very few attempts. One with Adolf Hitler as a kid’s imaginary friend and surrogate father-figure? Yeah, this is entirely uncharted territory. And if it doesn’t quite all work, it’s startling how much of it does.

Johannes “Jojo” Betzler (Davis) is a ten-year-old, living in a German town in the final days of World War II. His father is supposedly off to war, but contact has been lost, and with his older sister recently dead of influenza, it’s just him and his mother, Rosie (Johansson). Jojo’s dream is to become one of Der Führer‘s personal guard, but an unfortunate accident on a Hitler Youth training exercise makes him a laughing stock locally. Largely confined to home with his mustachioed make-believe mate (Waititi), Jojo is startled to discover a Jewish girl, Elsa Korr (McKenzie), living behind the walls of his house – and hidden there by his Mom, who is a closet anti-Nazi. 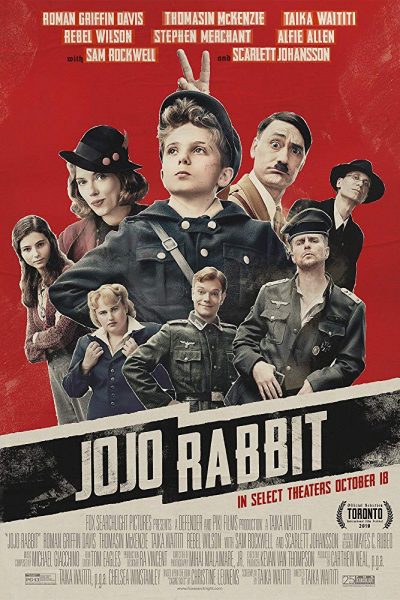 The main thread of the story is Jojo’s gradual de-radicalization, as he is unable to reconcile the anti-Semitic propaganda he has swallowed, with the very normal teenage girl Elsa is. She does not, for example, sleep hanging upside-down like a bat. In its dissonance between reality and myth, there are echoes of Borat, in his visit to a Jewish B&B, and its in depicting the difference that this film lives. The Hitler shown here is as far from a megalomaniacal psychopath as possible, and that’s the point. It’s Hitler as seen through a literal lifetime of propaganda, by a young boy who likely remember his father barely, if at all.

Similarly, the war is an almost entirely abstract concept. When Rosie and Jojo see a string of corpses hanging in the streets, the latter is almost confused: “What did they do?”. “What they could,” replies his mother ominously, foreshadowing her own acts of resistance. But this general refusal to see the darkness, means that when it eventually arrives – particularly, in a single understated shot – it’s all the more impactful. Just a shame the same can’t actually be said for Johansson, whose performance seemed out of kilter. Not necessarily “bad,” but it felt in tone, as if it came from a different movie to other members of the supporting cast, who include Sam Rockwell, Stephen Merchant and Rebel Wilson.

In the end, it is an optimistic film, ending in the Allied liberation of the town, and Elsa being able to return to normal life – or, at least, what’s left of it. Might this be slightly naive? I seem to recall it taking a bit more to beat Hitler than Germans discovering that, hey, Jews can be people too. But some critics seem to have forgotten that not every movie needs to necessarily be 100% accurate or aligned with their personal morality, in order for it to succeed…