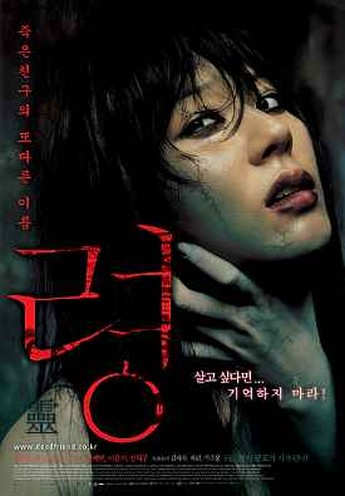 The long-haired Asian ghost girl is now such a horror stereotype that there are only two ways for its use to be palatable. You can either bring something new to the table, or execute the idea with imagination and style. Unfortunately, this does neither, the director apparently believing that watching characters cower in terror is sufficient, in and of itself, to make us cower in terror too. Er, that’d be “No”. Ji-Won (Kim) is a student with one of those conveniently cinematic cases of amnesia – you know the type, where her memories come back slowly, yet with perfect dramatic timing. After experimenting with a ouija board, her friends start dying off, and she has to piece together the truth about her past, while dealing with visions of her own.

“The Grudge meets Dark Water,” says the cover – call me old-fashioned, but I’d rather see a movie which comes up with ideas of its own, rather than being a shameless mix of elements from other films. Especially ones which weren’t all that good to begin with, if you ask me – and you seem to be, since you’re reading my reviews. 🙂 About the only spark of originality until the last five minutes is a somewhat Heathers-esque subplot, in which our heroine used to be part of a school clique, who may have been involved in the disappearance of a classmate. Stop me if you know where this is going: plug-holes clogged with hair, and ghosts who leave puddles when they walk. I do have to say, neither Chris nor I saw the final twist coming. That may be, however, because we were too busy struggling to avoid sleep.