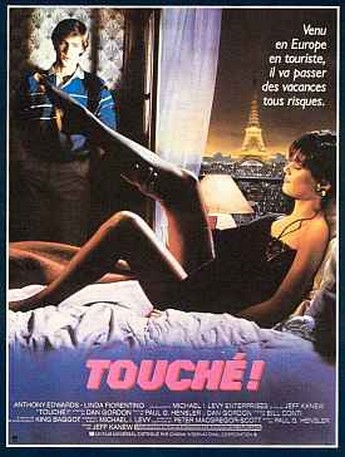 What tags this a child of the 80’s? The soundtrack, featuring Frankie Goes To Hollywood, Nick Kershaw and the chick from Dollar? The floppy hairstyle on a very young Edwards? The presence of a divided Berlin? Bit of all these, I guess, though it’s still an entertaining time. Edwards is naive student Jonathan who falls for foreign chick Sasha (Fiorentino), and follows her to East Berlin in her job as a “courier”. There, he gradually discovers she isn’t quite what she seems – to no-one’s surprise but his own – and finds himself carrying a roll of film everyone wants. When he escapes the Eastern Bloc and returns to Los Angeles, he thinks he’s safe…only to discover that’s not necessarily the case.

Despite being firmly a product of its time, Edwards makes for a sympathetic hero, reuniting here with Revenge of the Nerds director Kanew. The title refers to a paintball game Jonathan plays around campus; it becomes significant at the end, when he needs to defend himself from a posse of Communist agents. Oddly, these skills vanish entirely in Berlin, where he does nothing much but run away. That’s when the film is at its best: there’s some good tension generated there, as he has to deal with being a stranger in a strange land. Overall, it’s a nice, nostalgic blast; quite took me back to my youth, in the late 80’s, Interrailing round Europe – including one day in East Berlin (I attended a performance of My Fair Lady in German). Must say, never met anyone as hot/friendly as Sasha. “Probably for the best”, mutters a passing Chris…