Supercop Nick Angel makes the rest of the Metropolitan force look bad, and is reassigned to Sandford, the safest village in the country. At first, everything looks so peaceful as to be utterly boring, and Angel’s gung-ho approach is ridiculed by his colleagues – except Danny (Frost), who has seen every action movie ever made. But a rash of mysterious, and in one case incredibly gory, deaths gives Nick something to investigate; what he turns up suggests there might be more going on in Sandford than meets the eye. 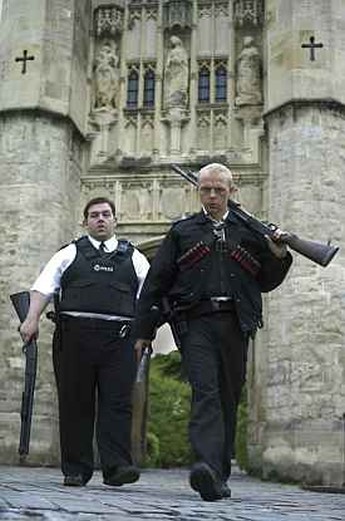 The chemistry on view here is impeccable, and the script perhaps a little subtler than Shaun. The satirical back-target here is the cloying nature of small-town, rural life, rather than the depersonalizing nature of big-city existence, yet the barbs hit with equal point, particularly the rampant xenophobia often found in such communities [Having grown-up in a town with a population under 10,000, I know exactly what authors Pegg and Wright mean]. However, the main victim is action movies and all their cliches: at one point, Danny asks Nick, “Is it true that there’s a point on a man’s head where if you shoot it, it will blow up?” And that’s during a presentation to a school. The film works best when it plays with these conventions, and the idyllic setting enhances their idiocy very nicely.

However, it’s not as good as Shaun, which worked both as a comedy and then, particularly in the much darker second-half, as a horror movie. They attempt the same thing here, but while the comedy still works, Wright doesn’t have a handle on the action – not really a surprise, since the awful Bad Boys II is held up as the pinnacle of that genre. The final 20 minutes turn into a repetition of all the cliches mercilessly mocked during the rest of the film. While that’s entirely intentional, they’re still cliches, lacking the inventiveness which elevated Shaun to such heights. Still damn good, undoubtedly – just a notch or two below this trio’s previous effort.