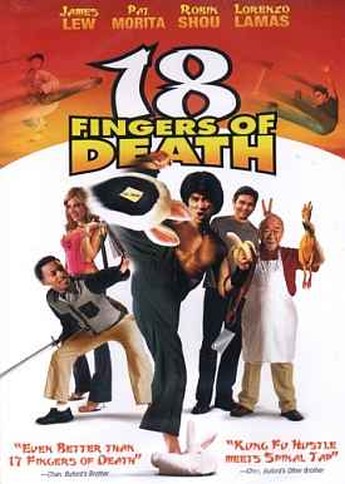 This starts as a mockumentary, following film-maker Ronald Mack (Patton) as he films martial-arts superstar (in his own mind, at least) Buford Lee (Lew). However, it gradually shifts focus, Lee trying to make his latest masterpiece, 18 Fingers of Death. There’s a cute mix of people imitating action stars (“Steven Seafood” or “Billy Buff”), and actual action stars (Robin Shou, Don ‘The Dragon’ Wilson and Lorenzo Lamas) which works nicely. However, the comedic material in question is just too uneven to be truly effective. Some of the jokes and situations are good – or even very good. On the other hand, some are so obviously unfunny as to make you wonder how they ever seemed amusing. I mean, a fight punctuated by farts? Maybe when I was nine, that would have seemed funny. Now…not so much.

It’s at its best when playing with the conventions of the genre, such as an admirably-deadpan Wilson leading a class in the technique of speaking out of sync. [Lew has been a stunt-man and fight choreographer for decades, hence the celebrity cameos] Low-budget film-making also comes in for its share of broad satire, though some characterizations border on the homophobic – and you know I’m not exactly politically correct or easily offended. Clearly made on a very, very small budget, it’s salvaged by an obvious, genuine love for the genre, and at least one utterly groanworthy moment, which appears to have strayed in from a Carry On film. That alone is probably enough to merit viewing, though I’d recommend you don’t actually spend any money on it.