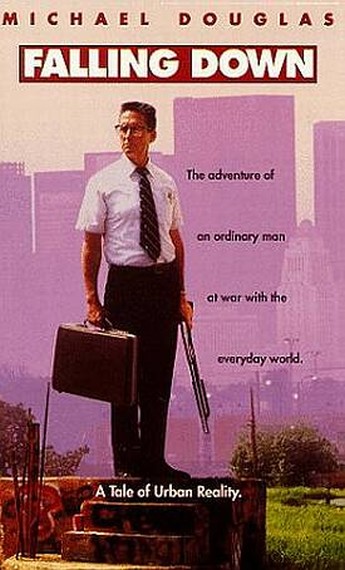 It’d be easy to dismiss this as a simple polemic about the poor, downtrodden white male, but it’s actually a good deal more subtle than it initially appears. The keystone is Douglas’s performance as D-FENS, known only by his license-plate, creating a character at once troubled and troubling, sympathetic and scary, who never sees himself as the bad guy, even after he has shot a man dead. This is not a simple vigilante picture, but a study in contrasts between D-FENS and Prendergast (Duvall), the cop pursuing him, whose life has the same pressures of work and family, but has responded to them in a totally different way. Both have their employment, which has defined them for years. Both see that taken away. One shrugs his shoulders and moves on; the other embarks on a crusading rampage of escalating violence.

It’d be equally easy to dismiss this as racist, especially as the first two encounters D-FENS have are both with minorities. However, that’d be wrong, as the film is equal opportunity in its cynical depiction of a society where the golden rule is, he who has the gold, makes the rules. Easily the most depraved is the white, homophobic, neo-Nazi surplus-store owner, which doesn’t so much slide into caricature as gleefully embrace it with open arms. That’s about the only time the film tilts over into ineffective parody; for the most part, the scenarios generally work because of plausibility. That’s the most disturbing aspect of this film: we’ve all been on the receiving end of the callous nature of modern society, and only our moral checks prevent us from reacting the same way.

What we wrote then [14] This is an incredibly clever piece of movie-making that stands a lot of liberal conventions on their head, with a refreshing lack of political correctness. At least one of the incidents in the film, where D-FENS (Douglas) fights for the rights of the little guy, is guaranteed to strike a chord, yet the movie never panders to the lowest common denominator, treating the audience with respect and letting them work things out for themselves. It is also a very funny movie, which most critics seem to avoid mentioning, it’s far more of a black comedy than I expected; the ‘thriller’ sections seem tacked on, as if to provide an excuse for the humour. But Duvall’s cop does provide an interesting contrast to D-FENS, though you’re left thinking either one could have “fallen down”. Or indeed, any of us could… A-