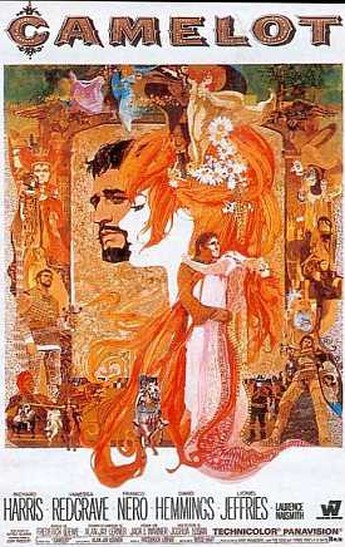 I blame Holy Grail. That, basically, ruined Arthurian legend for me, and as a result, it’s somewhat difficult to take this seriously: I was continually muttering, “It’s only a model,” every time they showed a castle, or rhyming Cam with Ham and Jam and Spam a lot. Not the film’s fault though, and the presence of solid veteran actors like Harris and Redgrave as King Arthur and Guinevere helps immeasurably. I think it’s key, in a musical, to have actors who can actually act. It’s a lot easier to fake singing, if necessary, than drama, and there’s not any problem in that department here. [Neither star is dubbed, so credit for that too] That’s especially important when the focus is on the human aspect, as here, rather than epic battles.

In a similar way to My Fair Lady, however, it’s the third-leg of the love triangle that proves problematic. Franco Nero’s Lancelot du Lac, is simply too much of a goody two-shoes to be appealing, and the resulting romance with Guinevere is unconvincing as a result. [Nero was dubbed, too, so it wasn’t his singing ability that got him the job] This hampers the second half of the film considerably, despite the arrival of Hemmings as a refreshingly-sleazy Mordred, who oozes around the castle like an oil slick on legs. The film also covers only a small section of the legend, from Arthur meeting Guinevere, through the collapse of the Round Table: no grail or Lady of the Lake, and Arthur often seems more a social reformer than a warrior king. It’s an unusual, if not impossible angle, albeit conceivably one less suited to the musical genre. At three hours long, it probably is too long, yet has its moments, even if I can’t help feeling a killer rabbit would have been welcome.