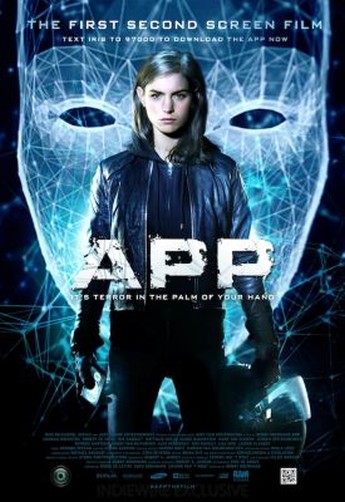 Occasionally, there’s an evening where a dumb horror flick is just what you want, and this delivered admirably – both in being dumb, and hitting the spot. Student Anna Rijnders (Hoekstra) finds herself with an unwanted app on her phone, one that can’t be deleted, and which seems to delight in maliciously embarrassing her. Worse follows, things escalating as the app triggers a psychotic breakdown of her professor, attacks her best friend (Hoekstra) and threatens her kid brother, a paraplegic who was just implanted with an electronic stimulator. There was a parallel phone app released in conjunction with the film, offering a supplemental experience – which must have been hell if you saw this at the movies, with all the glowing screens. However, you don’t need that to enjoy this, ludicrous premise though it may be, of a self-aware app that is capable of manipulating any electronic device in the vicinity, and appears to get very grumpy if you attempt to restore your phone to its factory settings.

The script certainly taps appropriately into the modern era, with some nice commentary in regard to the omnipresent camera-phone, and I smirked at the hidden message in the app’s name, Iris. [Read it backward…] Probably inevitably, the further it goes on and the bigger in scale things become, the more laughable and implausible are the results, though Hoekstra keeps wading through the dumb material with enough grim-faced determination to sustain its brisk 75 minutes. In this case, less is certainly more: another 20 minutes, and the concept would likely have toppled over under the weight of its own idiocy. Even as is, the ending leaves a great deal to be desired, giving absolutely no indication that the main threat – Iris – has been addressed. It’s obviously a gimmick film, and one which will not date well, any more than William Castle’s sixties flicks have. Yet, in 2015, it hits the spot, and I’ll confess to a little frisson, on the occasion when my own phone, sitting on the couch beside me, beeped at a particularly appropriate moment.