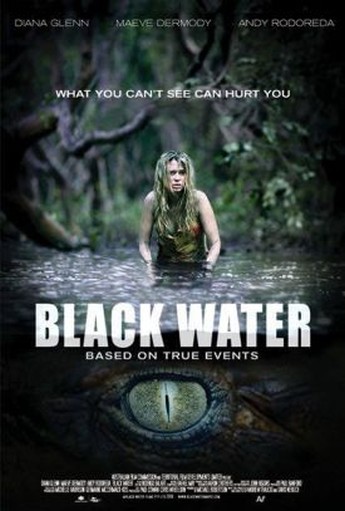 Husband and wife Adam (Rodoreda) and Grace (Glenn), along with Grace’s sister, Lee (Dermody), head off on a boat into the mangrove swamps for an afternoon’s fishing under the guidance of boat owner Jim (Oxenbould). However, after wandering off the beaten path swamp in search of finding bigger fish, the group turn from the hunters to the hunted, after a huge crocodile overturns their boat. Their guide is consumed, and the three survivors find themselves stuck up one of the mangroves in the middle of the river, with no way to escape – and since they went off their expected route and no-one knows where they are, chances of rescue seem slim. I fell asleep. Not once, but twice. And this wasn’t one of those films where I felt any guilt at doing so, because it singularly fails to do anything of interest with the above set-up.

Naturally, the reptile is possessed with an acute sense of dramatic timing, not bothering to attack when the targets are at their most vulnerable, but only when it’s convenient for the plot. Though nominally based on a true story, there’s not much sense of veracity to be found here, and there’s only so long you can watch three whiny people bickering up a tree before it gets old. That would appear to be about 15 minutes less than the film decides we need to see of this, and I found myself rooting for the croc at about this point. However, I lost all faith when it literally had one of the survivors in its jaws, and didn’t bite down enthusiastically. Because, reasons. Honestly, when your script involves your lead character tearing an arm off a corpse and slapping the water with it, to attract a crocodile’s attention, you might want to revisit how you got to that point.