Christmas Day saw a family outing to see this at the movies. It has been a while. As in, I think the last time all four of us were in a cinema at the same time was probably The Return of the King. So it has been a hot decade or two. At least the experience was, unlike last time, largely untroubled by assholes with mobile phones. This was, we generally agreed, a solid choice. It is a bit derivative, borrowing wholesale from Home Alone and Die Hard. However, it adds enough interesting wrinkles to be its own beast.

Jason Lightstone (Hassell) has arrived at his rich but obnoxious family’s home for Christmas, with his estranged wife and and adorable moppet, Trudy (Brady). The bickering and sniping is rudely interrupted by a home invasion from “Mr. Scrooge” (Leguizamo) and his band of unhappy little helpers, seeking $300 million in ill-gotten gains they believe is in the house’s vault. Fortunately for the family, Santa Claus (Harbour) happens to be in the house, even though he is not exactly a jolly Saint Nick. He’s having a crisis of faith, depressed by the world’s lack of faith and crass commercialism. Nothing a bit of affirmation from said moppet can’t fix, helping Santa get back in touch with his pre-Claus form. This was Scandinavian warrior, Nikamund the Red, who wielded a mean hammer against his enemies – which would now be Mr. Scrooge and pals. 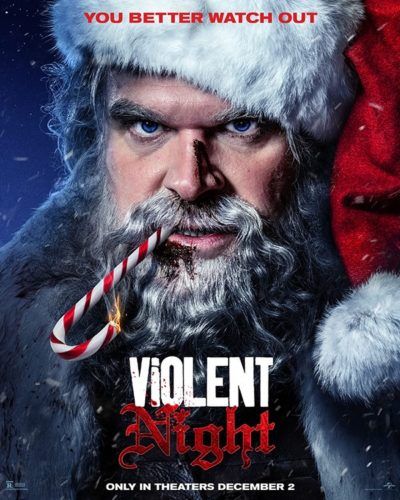 It wasn’t quite what I expected. I was thinking it would be more of a Santa-slasher, along the line of the recent slew of Krampus themed films. As noted, it’s more like “John McClaus”, with Trudy providing mostly moral support.  Yet on one notable occasion, she goes full Kevin McCallister and her traps line up with the “R” rating, in particular, the pointed use of a nail. Things do take a while to get going, yet there’s no denying their crunchily effective nature when they do. Best not think too much about the fine details, such as Santa being unaware of how to operate a gun, yet somehow completely au fait with driving a snowmobile.

I was surprised how much heart is in this, from the opening scene of Claus drinking disconsolately in a Bristol pub, and being comforted by a mall Santa. Anchored by solid work from Harbour, there is a sharp demarcation between the naughty and nice characters, and the former all receive appropriate lumps of coal. We’ve been fans of Wirkola since Dead Snow, and nice to see him escape the “straight to Netflix” label. It felt like he’d been cast out of ‘proper’ Hollywood after Hansel and Gretel: Witch Hunters was generally panned critically, though it was a box-office success, at least internationally. This shares a similar lack of pretense, as well as both being nicely twisted updates on a familiar legend. I can only imagine what his next slated film will be  like, bearing as it is the intriguing title of Spermageddon. It’s an animated musical, because of course it is. Can’t wait.