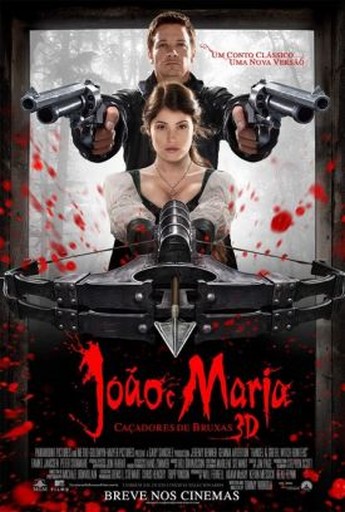 I would be the first to admit this is not great art. How could it be, when it follows the siblings, now they’re all grown up and carrying out a massive grudge against witches, for that whole “trying to eat them” thing. They now roam middle Europe, taking out (usually by fire) those who still seek to snack on the local children. Their latest job takes them to Augsburg, where they uncover an apocalyptic plan by the evil Muriel (Janssen), to create a potion which will make witches invulnerable to flames: the final element for the elixir is the heart of a white witch. Would Hansel and Gretel perhaps happen to know of one? The truth about their past, and what caused their parents to abandon them in the depths of the forest, is the key to the mystery, which brings them back to their childhood home, now Muriel’s lair.

Like I said, it’s nonsense, but it’s high-energy, enthusiastic nonsense with a sly sense of its own idiocy, e.g. etchings of the missing kids are wrapped around milk bottles, while Hansel has diabetes after being force-fed candy. It’s a deliberately anachronistic mix of the old and new, that is clearly not intended to be taken seriously – and you’d be the fool if you did. The actors and actresses all do a solid job with their performances, in particular Janssen, who nails the evil persona, even when operating through about six pounds of make-up. There are some well-crafted action sequences and occasionally startling gore [between that and the F-bombs, this certainly deserves the R-rating, though since they were there anyway, they might as well have lobbed in some more gratuitous nudity], though I’d have preferred it if they had gona for full out witch genocide, just to piss off all the Wiccans. If it plays like nothing more than a B-movie schlockfest, that’s the undeniable aim; while the target may be very low-hanging, there’s no arguing it nails it like a crossbow bolt to the eye.