This year’s edition is rather later than I normally like to get these things out, but it has been a rather hectic couple of months. However, I figure as long as it comes out before the Oscars, it still counts, dammit. I finished the year having seem 234 films, down a good chunk from the 278 seen in 2016, for various reasons. Mostly, I think, it’s an increase in the amount of TV series being watched, on Netflix and elsewhere. A couple more episodes a week, over the course of the year, would explain the drop in features viewed, even if some of the TV is being watched when I wouldn’t be likely to put on a movie anyway, e.g. with breakfast in the morning. The lack of a Phoenix FearCon in 2017 also had an impact, as that is traditionally always responsible for a slab of submitted features.

As usual, I feel obligated to explain the somewhat loose definition of “2017”. I am certainly not adopting strict Academy rules here. As long as a film was seen by me in 2017, and was at least somewhat released… somewhere, in some format… last year, that’s good enough for me. I’m certainly not going to agonize about whether a film’s theatrical debut was in 2016. There’s one of this list which originally came out in its home country in 2014. But it’s hardly the movie’s fault it sat in my Netflix queue for a substantial time, so credit where it’s due. Links go to the full review, either here or over on GirlsWithGuns.org.

Because fuck you, that’s why. If ever there was a year where ludicrous escapism was necessary, it was 2017. And they don’t come any more ludicrous than this. What we said: “After a couple of entries which were pretty much the poster-child for declining returns, this returns to the deadpan ludicrousness which is necessary for the series to succeed. As a result, it’s the best entry, certainly since Sharknado 2, and possibly in the series [a final decision would likely require rewatching both. Don’t hold your breath].”

In horror, especially, I’m still a strong support of practical effects over CGI. They have a physicality which even the best software can’t match, and that’s an essential part of the genre. This film shows exactly what I mean. What we said: “A festering love-child of Hellraiser and The Thing, with H.P. Lovecraft as the godfather, this may be little more than a hodge-podge of influences. However, those involved largely know what they’re doing and have put together some of the most impressive bits of icky body horror since fellow Canadian David Cronenberg was operating at full throttle.”

Proof that films don’t necessarily need to be likeable to be memorable or good, you’ll never look the same way at Michael Biehn or Angus Macfadyen again. What we said: “For a film which I can’t remotely claim to have understood, I still enjoyed this surprisingly much, helped by the nods to film culture. Movie geeks will have fun spotting all the references, from Citizen Kane to The Twilight Zone. The four main cast members are all excellent and command your attention. Macfadyen, who also wrote the script, is intensely magnetic: I would genuinely want to see him do Hamlet after this.” 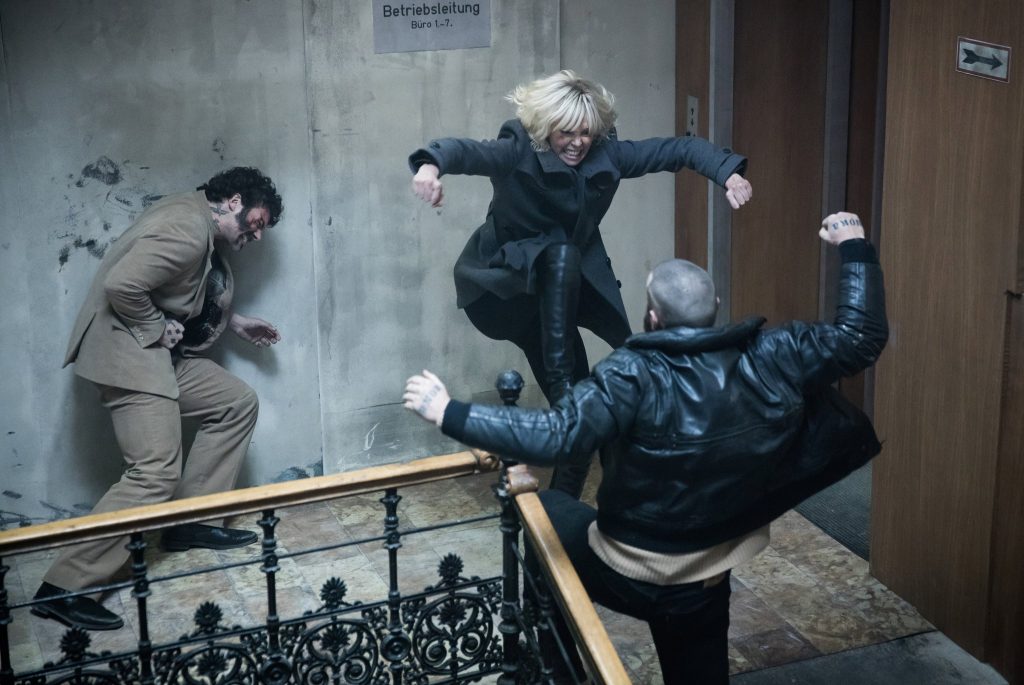 Including easily the most staggering, jaw-dropping action scene of the year, must confess this didn’t quite stand up to a second viewing as well as I wanted to. But still pretty damn good. What we said: “We have a new action queen in town. With Angelina Jolie apparently abdicating that title after Salt, the throne was vacant. Theron had already made a very solid case in Mad Max: Fury Road, then solidified it in The Huntsman: Winter’s War. But there were still doubts: could she hold the true focus of a genuinely action-driven film? There are doubts no more, for Atomic Blonde gives us Theron in the role of Lorraine Broughton, the baddest-ass heroine since The Bride in the first Kill Bill.”

They should just put the poster of this in the dictionary, next to the phrase “From bad to worse,” and be done with it. War, huh? What is it good for? What we said: “Despite being largely a relentless and harrowing depiction of the horrors of war, there are some surprisingly funny moments. The strange incongruousness is very humanizing, and helps brings home that these are people. While that may seem obvious, it’s something often lost in the epic scale of bigger war pictures. The much narrower focus here definitely works to the film’s advantage.”

As we sadly come to terms with the fact that it’s about time someone put a bullet into the head of The Walking Dead, along comes this entry from Korea, to prove there’s (shambling) life in the zombie genre yet. What we said: “It’s the kind of film which you probably could pick apart without much effort. For instance, some of the digital effects are distinctly ropey, and the story-line will be familiar to anyone with even a passing knowledge of the genre. Yet, it’s still greatly entertaining, mostly thanks to Yeon’s imaginative eye for carnage, on both the small- and large-scale. The enthusiasm and inventiveness present goes a long way to overcoming the limitations in the script.” 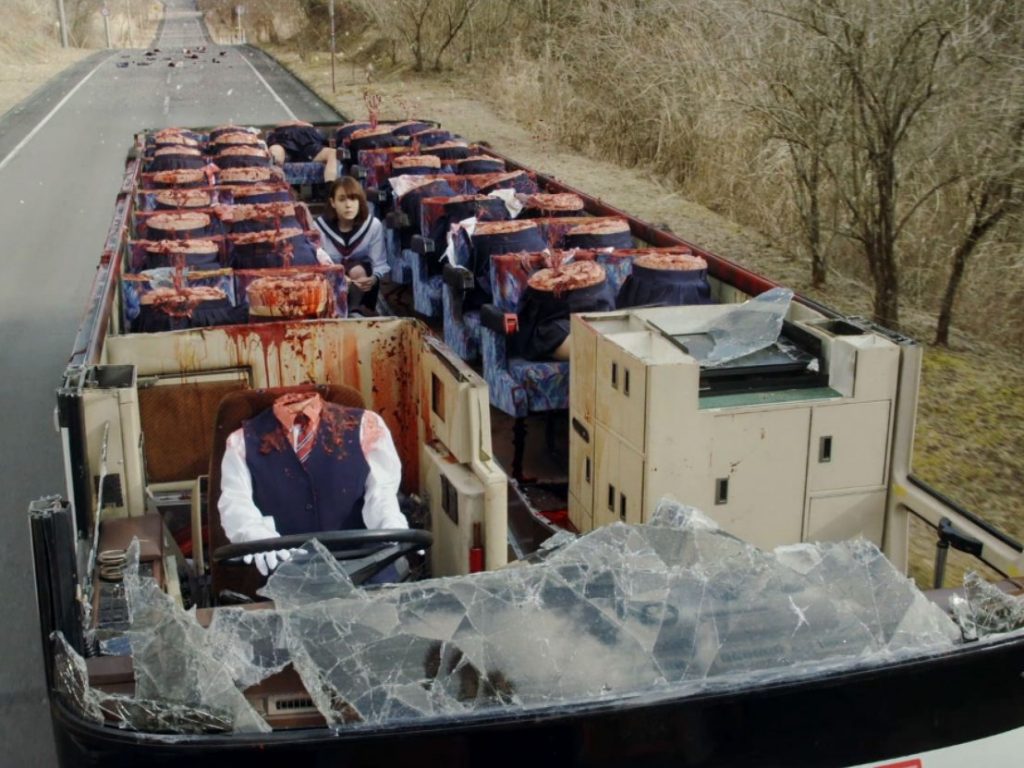 There’s a case to be made that Sion Sono is now out-Takashi Miike-ing Takashi-Miike, at the intersection of surreal cinema imagery and the old ultraviolence. What we said: “There’s a lot to admire here: it plays almost like a cross between Sucker Punch and Run Lola Run, combining the slick visuals and “anything can happen” mentality of the former with the latter’s… Well, mostly its running… Sono is both embracing and critiquing the exploitation world in which he has largely operated, although does so with a light enough touch, you can simply enjoy it as a blood-drenched action film, rather than having to worry about its philosophy.”

Never have punches and the other sounds of brutality sounded so goddamn crunchy… What we said: “A gloriously mean-spirited “comedy” [and I used the quotes out of reverence, not in a bad way], which combines social satire with gleeful hyper-violence, at a level where you would not expect to find serious actresses… This is cinematic schadenfreude: watching two thoroughly unpleasant and entitled people lose it all, and take it out on each other. Particular credit goes to the sound design crew, who really go to town, with the blows having so much impact, it feels as if the punches are being launched from a missile silo in Wyoming. You’ll certainly come away with a new appreciation for the art of foley.”

The only film this year which was more mean-spirited than Catfight, this pulled back the thin veneer of civilization to show exactly how far people will go, when pushed. What we said: “As an exercise in dark-hearted carnage, this is great. Some people have expressed disappointment that lovable James Gunn, who gave the world Guardians of the Galaxy, would be so bleak as to write this.But they forget, this is the man who also gave us Super, Slither and cut his teeth on Tromeo & Juliet. It takes some guts to have a lengthy sequence of a boss selecting members of the workforce for execution – and you may well find yourself wondering, which side you’d end up on.”

The best female vigilante film since Ms. 45? And who better to play that role than the daughter of an all-time vigilante legend, Clint Eastwood? What we said: “There’s something particularly timely about watching this, the same week that the truth about Harvey Weinstein finally came out. Yet despite this, the script here is considerably more measured than it could have been. Even the vigilantism at the film’s core is not portrayed as universally the right thing. The film suggests it may do more harm than good when you carry it out on behalf of other people – perhaps doing more damage by re-opening wounds they are trying to heal. It’s all far more thought-provoking than I expected, and it helps there’s something of a young Angelina Jolie about Eastwood, between her high cheekbones and expressive eyes.” 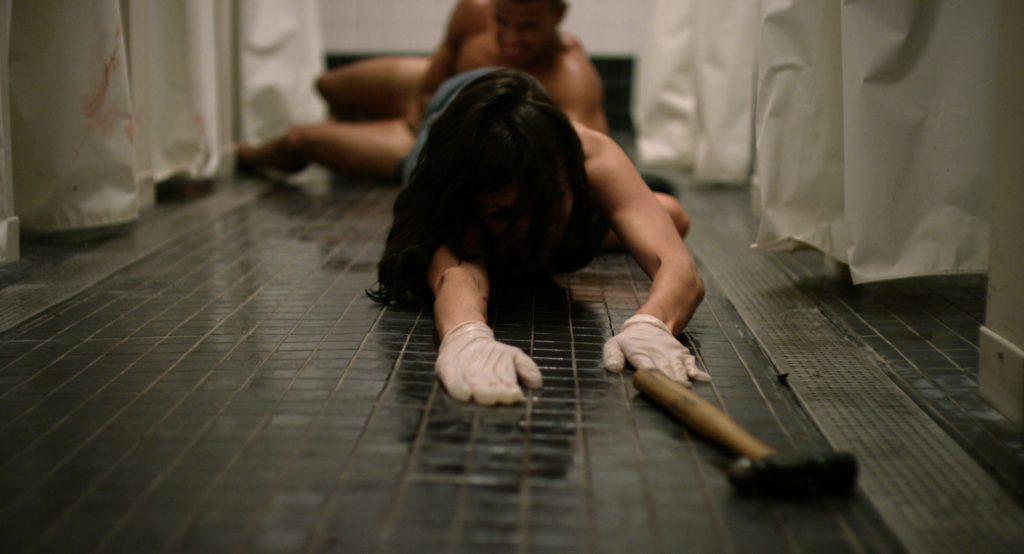