I was going to start by calling this, “A severely twisted combination of Office Space and Battle Royale“, but going by the poster, it appears someone else got there before me. [Shakes fist in air]. It is a valid, if somewhat lazy, comparison for this, which sees a strange day unfold in the Bogota, Colombia offices of Belko Industries. All the local employees are sent home, leaving just the eighty expats. Stringent security precautions are in place. But that’s nothing compared to the sudden and impenetrable lockdown imposed, keeping everyone inside – and the voice over the PA, instructing the workers to kill two of their number, or more will be killed at random. Initially, it seems like a prank. Until bodies start dropping, and it becomes clear the “trackers” implanted into all employees – supposedly an anti-kidnapping device – have a more explosive purpose. 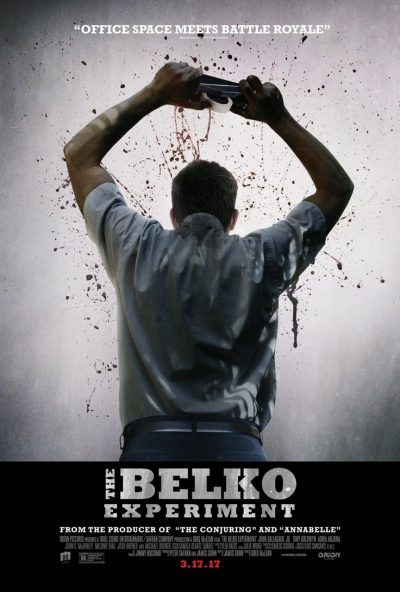 Any facade of civility rapidly disintegrates, and the group splits into two factions. One, led by executive Barry (Goldwyn), has no qualms about doing whatever is necessary to survive, and following the voice’s instructions – even if that means killing co-workers. The other, headed by Mike (Gallagher), thinks that isn’t necessary, and they can find a way out which doesn’t involve wholesale murder. I’m reluctant to say much more, because how things end up unfolding, came as a thoroughly pleasant surprise to my cynical self. For this is refreshingly mean-spirited, particularly apparent during the montage of exploding heads, set to Tchaikovsky’s Piano Concerto No. 1.

As an exercise in dark-hearted carnage, this is great. Some people have expressed disappointment that lovable James Gunn, who gave the world Guardians of the Galaxy, would be so bleak as to write this [He was originally going to direct it too, but lost interest in the concept, as at the time, he was going through a divorce]. But they forget, this is the man who also gave us Super, Slither and cut his teeth on Tromeo & Juliet. You could credibly argue it’s the family-friendly Guardians franchise which is the aberration in his filmography, rather than this. It takes some guts to have a lengthy sequence of a boss selecting members of the workforce for execution – and you may well find yourself wondering, which side you’d end up on.

It is far from perfect. The characters are so briefly-drawn before the lockdown begins, as to be ciphers. There’s a lot of satirical potential in the concept that is left on the table: this could have become a real “Us vs. Them” metaphor for the modern work-place. And quite why it is set in Colombia is never made clear, beyond a vague hinting about this being South America, where life is cheap. Though this does provide an excuse for Latin pop versions of California Dreamin’ and the particularly ironic, I Will Survive. Additionally, the ending reminds me very strongly of a certain TV series. Yet I’m prepared to let all that slide, when the overall impact is a steadily escalating depiction of man’s inhumanity to man.