The Chilean Chainsaw Massacre. Only, without any actual chainsaws. That’s more or less what we have here. Ana (García-Huidobro) and her four pals are driving through the countryside, the car breaks down. Before you can say, “Is that banjos I hear playing?”. they’ve been captured and taken to the estate belonging to a very strange family indeed. It’s hard to be sure quite what their purpose is. There’s a rich guy in a big house, who appears to be behind things, and the kidnap appears to have taken place at his behest. Breeding purposes may be involved. Ana, in particular, appears to be treated differently from her friends. For instance, they’re chained up, or at least confined: she has almost free run of the house and its grounds. Quite why, is never explained. 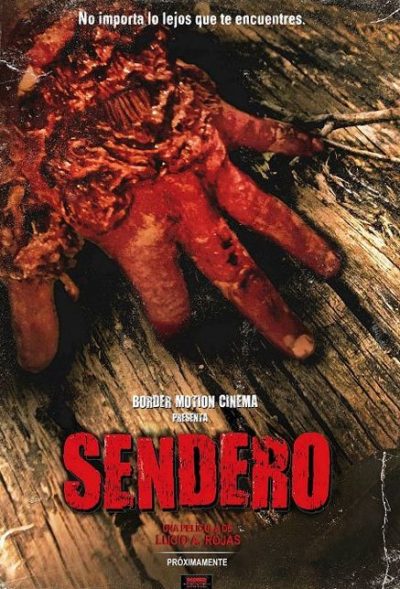 The title translates as “Path”, which makes about as much sense as the rest of the film. It appears to be going for a low-rent, nightmarish kinda feel, in which any indignity or torment can happen at any time. This is about the only way I can come up with to explain scenes like the one where one of the captors stands in from of a captive, masturbating furiously, only to be caught in the act by a colleague, and raped as punishment. Oh, they’re both men. Should probably mention that. It’s certainly out there, and there are occasionally moments of fairly impressive and practical gore. The problem is, these have no emotional impact, because you don’t have any particular reason to care, and the violence seems entirely arbitrary.

Rojas needs to provide something on which the horror can be hang. One of the things which made Texas Chainsaw so effective, was the “saw is family” concept. Right from the get-go, Leatherface, Grandpa, etc. were like a broken mirror, reflecting a sick and twisted version of the nuclear family. They were just like us – only psychopaths. The sole entrant who manages to deliver on that front here is Carmen (Gutiérrez), who appears to be the matriarch in charge of operations on the ground. She actually comes over as a personality with intelligence, rather than behaving as an animal in clothes. Her character is all the more scary for this, than the lumbering thugs who work for her. And I’m not sure if make-up was involved, or if it was her natural look; either way, she looks distinctly creepy too.

There’s not much in the way of Chilean ambiance here. Not that, admittedly, I would know Chilean ambiance if it was offered to me on a silver platter. But you don’t get a sense of any specific place or time. There’s some guff about Ana getting a scholarship in France, but being scared to tell her boyfriend or her parents about it. And one of the people on the trip appears to be an ex of hers, for whom she still has feelings. Both of these can be completely ignored. Because the film certainly does, as soon as the mayhem begins. If that’s all you’re after, this is fine. If you want more, look elsewhere.