After a couple of entries which were pretty much the poster-child for declining returns, this returns to the deadpan ludicrousness which is necessary for the series to succeed. As a result, it’s the best entry, certainly since Sharknado 2, and possibly in the series [a final decision would likely require rewatching both. Don’t hold your breath]. It’s a high-paced gallivant around the globe – though sadly, at no point do the sharks actually attack the Great Wall of China, as certain promo pictures would have you believe. They do, however, visit a number of other global landmarks, to thoroughly satisfactory effect. 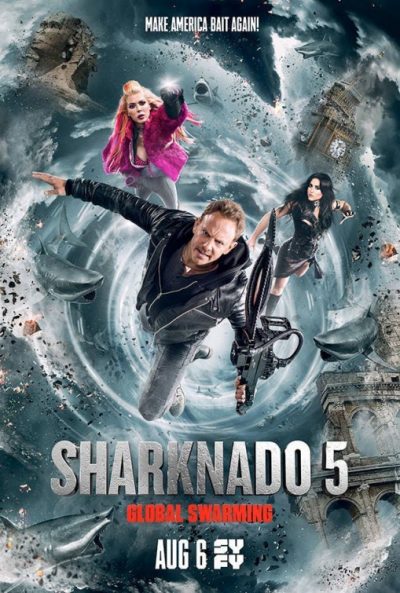 The traditionally thin excuse for a plot see Fin (Ziering) separated from his child Gil (Barratt) by a sharknado which – for reasons never made clear – has a teleportal inside it. To rescue Gil, he’ll have to follow the trail through that portal to…wherever the other side lands. Which, conveniently, is inevitably beside those global landmarks, rather than the middle of the Pacific Ocean. Alongside him is wife April (Reid) and sharknado hunter extraordinaire, Nova (Scerbo). There are also the inevitable abundance of celebrity cameos, most of which will make no sense when post-apocalyptic historians restore this nugget of 21st-century culture.

Action starts in Britain. where Fin and Nova are retrieving an ancient artifact from the extensive cave system which, as we all know, lies under Stonehenge. Turns out sharknados have plagued mankind since prehistory, and this fin-shaped icon could be the key to deflecting them. From there, it’s to London, for an extensive sequence, at which I laughed like a drain. Not least, because it’s the absolute worst depiction of Britishness since Dick Van Dyke’s accent. I presume this is a deliberate stab at such previous failed efforts, beginning subtly with the usual London/Tower Bridge mix-up, but eventually escalating to… Well, if you’re not American, you probably won’t know Charo. But this is Charo playing the Queen of England.

It’s so utterly inappropriate, it can only be deliberate – though if more proof is needed, Fabio later plays the Pope. I am, however, willing to let it slide, since it allows Ziering to deliver the line, “Forgive me, father, for I am Fin…”, before receiving the Holy Chainsaw from His Holiness. This was presumably held in the same secret Vatican vault as the Hand-Grenade of Antioch. After London, the film bounces through various other cities, two being particularly notable. Sydney sees Olivia Newton-John and her daughter turn the Opera House into a missile-defense system, with the aid of Tony Hawk. And in Tokyo, the city is threatened by a gigantic shark, formed from thousands of smaller sharks (it reminded me of “In the Hills, the Cities”, from Clive Barker’s Books of Blood). Nice to see the Tokyo Tower is still a monster magnet.

The ending is certainly the best in the series, not least because it’s remarkably bleak, compared to the obviously lighthearted tone of the franchise. Fin is left, alone, wandering a blasted post-apocalyptic landscape, until a Hummer shows up, driven by… the best cameo in the series to date too. Let’s leave it there. What transpires makes it clear that, if this film played fast and loose with geography, the next entry will do the same with the dimension of time. I’m intrigued by the possibilities here, and am genuinely looking forward to Sharknado 6: Shark to the Future, or whatever it ends up being called.

But, goddammit, if there’s not a cameo from Bruce Campbell – or, at least, a blue police-box – I’m going to be slashing the seats.