“Let’s watch Pulgasari,” Chris said. “It’ll be fun,” she said. She had stumbled across a clip which was shown on Last Week Tonight, and there’s no denying, the story behind it is certainly one of the weirdest and most intriguing in cinema history. Unfortunately, the movie itself – not so much. Even Chris was rapidly reduced to flipping through Facebook on her phone. But we’ll get to that later. Let’s start with the fun stuff. 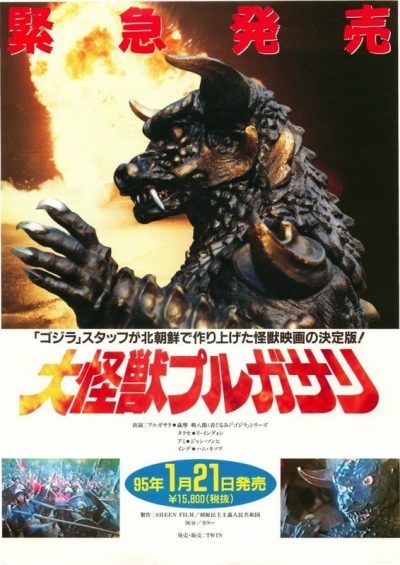 In the 1980’s, North Korea was under the rule of Kim Il-Sung. His son and heir, Kim Jong-il, is who concerns us here. He was a bit of a character too, who North Korea legend has it, once shot 38 under par for a round of golf. One of Kim the younger’s other passions was film-making, and he even wrote a book about it, On the Art of the Cinema, in 1978. But he was dissatisfied with the movies being made by the local industry, and decided the best way to improve the level of talent was… By kidnapping South Korean film-makers.

Actress Choi Eun-hee was abducted from Hong Kong in 1978, and six months later, her recently separated husband, director Shin Sang-ok was also captured there. He may have minded less – he had got into trouble with the South Korean government, and his film studio’s license had recently been revoked. But after five years of “re-education,” they were reunited, and agreed to start working for Kim, with the full backing (financially and artistically) of the state, making seven features between 1983-85. On a trip to Vienna in 1986, they escaped their minders and sought asylum in the American Embassy, finally ending their eight-year ordeal as indentured film-makers.

[Shin subsequently worked in Hollywood, directing 3 Ninjas Knuckle Up under the pseudonym of “Simon Sheen”. He might have be forgiven for wishing he was back in North Korea. He also made The Legend of Galgameth, whose IMDb synopsis reads, “A young prince fights to free his people with the help of his family mascot, a small dragon who grows upon eating metal.” Hmm. He was finally able to return to South Korea, despite fears he would face issues as a collaborator. Fortunately, he had tape-recordings of some of the conversations with Kim, and these helped smooth things over. Shin died in 2006, and was posthumously awarded the Gold Crown Cultural Medal, the country’s highest artistic award.]

Pulgasari was the last of the collaborations between him and Kim, and is interesting mostly because it can be read in a number of ways. While apparently inspired by a 14th-century legend, the most obvious influences are the Godzilla films of Toho. Indeed, Shin was able to bring over one of the men who wore the big G’s suit, Kempachiro Satsuma, to play the bull-headed Pulgasari, although there’s some suggestion they were misled, and thought they would be filming in China. And when he needed thousands of extras for the climactic battle scenes, the North Korean military were happy to send over as many troops as needed.

The obvious plot sees a despotic king oppressing his people. A blacksmith crafts a figurine, on which his daughter accidentally spills blood. If you’ve seen Hellraiser, you’ll know this is never a good thing, and it rapidly grows into the titular creature, which feeds on metal, grows to epic size and stomps the bad guys. Kim, apparently, saw it as a metaphor for “the people’s struggle against greed, private wealth, and oppression.” But the evil king can also be read as a blistering caricature of Kim himself, and you can take the whole thing in that light. Or perhaps the monster is Kim. Take your pick. [The actors may also be blinking out messages in Morse code. Keep an eye out for that…] 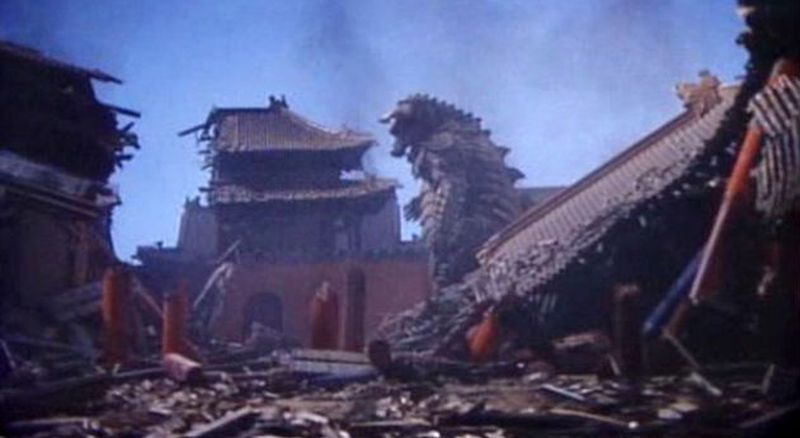 But that’s about the only entertainment value to be obtained here. It’s a horrifically slapdash production, with the monster looking like something which would fall out of a discount Christmas cracker. There’s absolutely no sense of personality in Pulgasari, and Satsuma never get the chance to do anything which might bring the character to life. Rare are the scenes where you even see it and any humans in the same shot; when they do arrive, you realize why the makers were so reluctant, because you can literally see the join. It’s clear that, even with the injection of Japanese experience, the crew were vastly out of their depths.

There’s only one moment which will stick in my mind. It comes right at the end, when the happy populace are celebrating the overthrow of their evil overlords [something for which actual North Koreans are still waiting]. It suddenly cuts from the post-revolution party, to Pulgasari, wandering alone through the devastated landscape which has resulted (above). It’s surprisingly poignant: what’s a monster to do, when there are no more armies to scatter, or pagodas to be smashed? In this case, after a heartfelt plea from the peasants to stop eating their farm implements, he explodes. Because this appears to be its method of reproduction, a mini-Pulgasari arising from the remnants. Sadly, no franchise was ever forthcoming.

The non-monster scenes are likely even worse, a hodgepodge of bad acting and worse social commentary, which feels like they come out of a Cultural Revolution film-school project. I did quite enjoy the attempt to exorcise Pulgasari: between the Really Big Hair, excessive eye make-up and frantic booty-shaking, it comes across as a Marxist critique of New Wave, missing only the leg-warmers. But it’s mostly a buffet of stupid efforts to get rid of Pulgasari, e.g. setting the really big monster on fire. How’d that work out? Although the rocket-propelled arrows were a nice touch, and I think the Lannisters could have used something like them for anti-dragon purposes in Game of Thrones.

Like most mediocre movies, the fun is mostly in getting all MST3K on its ass, and there are copious elements worthy of scorn. I also almost managed to convince Chris this took place in contemporary North Korea – “They’re just a little behind the times.” But it’s something where a brief clip is likely much more entertaining than the full thing, and you’d be much better off sticking to the Japanese originals.